The bull can be a powerful ally or a ruthless enemy. Being able to hit the bullseye on command is very important. Each match is started off with a diddle. The player closest to the DB wins and gets to decide on the start of the match.


Shooting at the bull early in a Cricket match can be a huge confidence builder. If I have the darts at the start of a match and hit the T20 with the first dart I might consider going after the bull. If I was able to hit DB, SB with the remaining two darts I am now in control of the two largest scoring sections per dart on the board.

Inexperienced players leave the bull as the last option in a Cricket match and loose because they fall behind in the points and can’t recover. I’ve lost count at the number of games I lost because my opponent was a better bull shooter than myself. This was one of the things I knew I had to work on to improve my game.

The practice game I’ve been using is 100@BULL. You throw 100 darts at the bullseye and keep track of the number of times you hit the SB, DB and MISS. My personal best is slowly increasing. Right now it is at 54. With the amount of practice I’ve been putting in my confidence has grown about hitting the bull when I need too. I use VBA’s Excel program to keep track of the darts. You can find a link to the file in the Downloads section on http://www.sewa-darts.com. 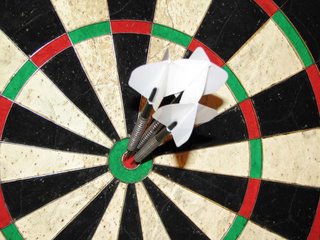 Pictured is a 6 BULL I hit during a practice game of 100@BULL. Throughout the course of the day I played this practice game 6 times. This was during my 5th game. The darts pictured are a set of w-grip’s from Atlanta Darts. Configured with short nylon shafts with rings and white Ruthless RX4 flights.

Mcvickj, this is a very nice commentary on the importance of the bullseye. I too will often take early shots at the bull in cricket if there is the opportunity, but only if there is opportunity. For me that would have to be that I could not open a number with a miss into the fat. In that case I would rather go for the bull.

Well I was right. We opened a number, got our points back and when I needed to I closed the bulls quickly with very few darts. That really good and experience opponent was almost able to rattle our cage a bit by distrating us with open bulls. That is a good ally indeed!

Ah.. that was supposed to be:

"This rattled my _partner_ a bit"