I received a care package this morning from my friend Beni Petris all the way from the Swiss Mountains! The care package contained two awesome things: A Euro Board and a record with some dart related songs on it: 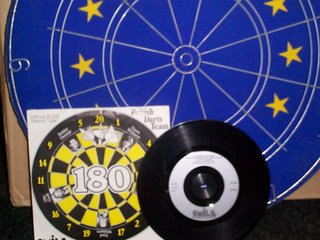 The Euro board is quite special for several reasons. First, it is a bristle board of the highest quality. This is special because normally when you see promotional boards or anniversay boards from banks and non-dart companies, etc. they are of the cheaper paper-wound variety so that they can print both sides. This one is bristle. The second reason it is special is because it is a twelve bed board numbered one through twelve. This is unheard of. The only other twelve bed boards I know of are the Ipswitch and London 5's boards and they are numbered 5, 10, 15, and 20, times three. Thirdly, I am pretty sure this is a limited edition board, which makes it pretty rare. A good find. Thanks Beni!

The record is the most awesome thing I have ever seen. I put it on as soon as I opened it this morning. The small record, 45 RPM, has two songs (one on each side). The Side A song is the very peppy and up beat BDO Theme Song "180" which inspires an involuntary jig when listened to.

Side B has a more lilting and slower tempoed Bobby George Theme Song, which starts:

"One hundred and eight,
That is what my life is all about..."

Both are fun songs. I hope to find their digital versions someday. Both items will be blogged in much more detail when I have more time!

The guy who sent these to me is the very same guy who got me interested in collecting dart boards in the first place. I discovered the wonderful variety of dartboards the first time when I say his page dedicated to his boards. I happen to know that he has many more boards than he is showing on his page because I have seen his ebay moniker pop many times in auctions. So everyone please visit his awesome collection and then write him (find his contact link) and tell him to post all his boards!

Thanks Beni for the awesome package and I hope all is well for you in the Alps!
Zeeple
Posted by Zeeple at 3:12 AM