The One That Got Away

This one is for kdog.

Sunday night and I am just hanging with the dog and grooving on this here Johnny Cash.

John Henry said to his captain, A man ain't nothin' but a man.
But if you'll bring that steam drill round, I'll beat it fair and honest.
I'll die with my hammer in my hand but I'll be laughing
'Cuz you can't replace a steel driven man.
Flipping through some old pics I saw on that reminded me of kdog's last comment. This pic is how I think of his balancing act shot that 'got away'. I have had this shot for a long time. I do not remember when I had this happen but I stashed it away in a folder somewhere and just figured I'd blog it eventually. I have a lot of shots like that. The longer I wait though the less topical they become and the less I remember the circumstances or why I took the shot in the first place. 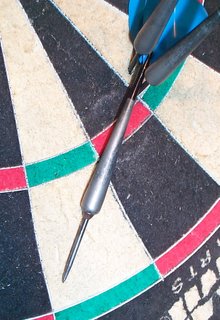 The pic above for example. I don't shoot with the GT's as much as I used to. They go in and out of fashion and these days I mostly shoot with my 16 grammers but I have had out my 12 gram darts in the last few days. Another clue that really dates that photo is the Sprialine flights. I used to be really hot on the Spiraline flights but not so much anymore. Perhaps I will get back into them someday but for now I am stuck on my Dynastar system. I sent some Spiralines to my buddy Barn in Seattle and he ended up wanting more of them (at the time - not sure about now) and just a few weeks ago I sent some to mcvickj. I am anxious to see his opinion of them. 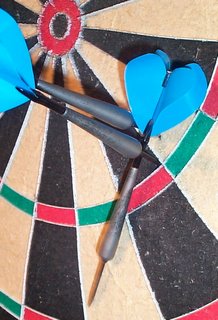 This is a nice picture though. A good tight grouping in which one dart slips off the others and is caught by the flight. Just hanging there not wanting to fall to the floor. As if it were afraid of the certain death the distant floor represents.

John Henry told the captain, Tell the kind folks don't worry.
That ain't nothin' but my hammer suckin' wind! (It keeps me breathing.)
A steel driver's muscle I intend.
Posted by Zeeple at 7:22 PM

That's a pretty kewl trick. I've only managed to do that a couple of times, but never seem to have my camera handy when it would be nice to capture it on film. Of course when I do accomplish this feat it is never at a good time... like when I need a 180 and hit 2 darts in the trip 20 and the last one ends up like your photo.

On a side note... My friend that is bringing the Puma boards into Canada had some interesting news. He had a chance to meet with a Puma rep and the President of the company on Friday. Turns out Puma is negotiating to be the official board of the PDC. Keep your eyes open for the Bandit in the next major televised PDC event. You might just see a bandit up on the wall. :)

Holy Darts, Batman! Bandits at PDC events? That would be huge! Seems like the PDC has been a Unicorn stronghold for a long time but I could be wrong, if I am not mistaken Unicorn has even changed their Eclipse design more than once to make the PDC happy. It would be tough for Puma to get in there I'd think. But thansk for the tip and the news! It'll be interesting to see how it goes.

they are good pic, te one that had to me was close, the flight was actually between the barrel of the two that were in the board already.

Sounds like it was a great shot kdog. Once you get your new darts from Jeff PIckup you can send me some pics and I'll post em for you.

Yup, I think it would be kewl too. I don't know if it is a sure thing yet or not... but I'm gonna bet that a contract that lucrative would inspire Puma to do some customizations too. In fact they already build a board for the Chineese that is part of a custom line. Still... gotta see em at a PDC event to beieve it.

Jason, that's all kindas cool. I am interested in this Chinese custom board. Do you have a picture of it anywhere? What is different about it?

Wow, I think I just lost a comment in cyberspace somewhere. Lost in google, bouncing around their tens of thousands of linux boxes like a ping-pong ball. Lol. I am very interested in any information you have on the Chinese customized board by Puma. Any pics anywhere? What is different about it?

I'm not really sure what the customizations are, but I don't think I'd get too excited over this one... its a standard dartboard configuration, but although the wires are embeded, they are raised quite a bit. I believe they sand the surface of the board before they silk screen it as well (which may in fact just be part of standard board creation). Probablly looks just like a Unicorn board. lol.

Nuff said. I think highly enough of Bandits that a _unique_ Bandit certainly peaks my interest. I was envisioning maybe a number ring that had Han characters instead of Arabic Numerals that kinda thing. How cool would that be?

I have since discovered that the PDC contract with Puma is only for the televised event of the PDC Desert Classic. On the plus side though, Darts will be a bigger televised event on TSN/Sportsnet here in Canada over the next year, splitting half the time allotted for Poker events.

One event is better than no events in my humble pie opinion. But you know what, the fact that cananda is shring its poker time with darts, spliting it even, is awesomer and awesomer. That'd be awesome if we could get rid of some of this god aweful poker crap in the states. It's lost it's novelty already.

Zeeple as of today i may have to
put the jeff darts on the back-burner.I'm still trying diferent thing right now. i just got my board up and i been thrown alot nothing pic worthy at this time.
but when i do get the jeff darts up and running again i'll let you
know. i'm still thinking about the design, that's what is taking so long because i want to make sure of thing i like and don't like are
taken into consideration. you know how it is when you want something to be "perfect".so the saga goes on.

Right on kdog! Don't jump the gun on something like this you gotta know what's goona cook your stew if you take my meaning. You order a set of darts you rushed on and then you don't like 'em that aint no good at all.

So more power to you. I always have ideas in the works and sometimes I change my mind last minute and don't go through with it. So enjoy your board and your current darts and keep thinking... "Man these darts would be awesome if..."

with things happening with the darts im using now 25 great whites with x short nylon shafts and poly slim flights and practing almost every night for 2-3 hours they are starting to feel good. nothing good for pic yet. almost got a rd9 this afternoon, missed the t19 by the wire