I had a very darty Christmas this year. In addition to a couple more pairs of my favorite jeans I ended up with some very nice dart related items. Take a look: 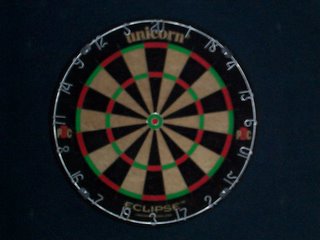 First, I scored a brand new Unicorn Eclipse dartboaard. It didn't have the white blades I was expecting, but it is a very nice dartboard. I threw on a DMI Bandit for several years and I still think it has a few years left in it before it is completely kaput, but I asked for a new dartboard anyway. The Unicorn Eclipse is the premium offering from Unicorn and a direct competitor with the Bandit. I wanted it mostly because the Bandit was getting really beat up on the blades and the reason I didn't go with another bandit is because I wanted to have a chance to compare the premium boards over a long period of time. This time next year I'll be able to provide a definitive "which is better" declaration. 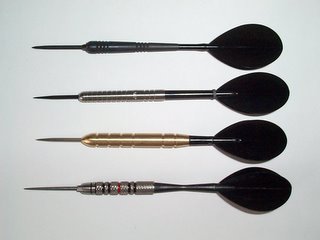 Four new sets of darts. In order from top to bottom: 20 gram black GT2's wearing Spinpactor points and black aluminum GT screw-in shafts with black poly pears. This is a nice dart. It throws pretty consistently despite the fact that it is a very light dart. The nice taper on it is the redeeming factor, of ocurse. A good forward weighting will make grammage nearly irrelevant. The second dart is a 21 gram fixed point Steve Coote Signature Datadart. Also a terrific dart with a nice feel. The third dart is a 21 gram brass dart that came free with the Eclipse dart board. They are massive compared to what I am used to, but I like them a great deal. They are quite long and so I have to use an extra-short nylon to get the dart to the length I like. All of these darts, by the way, are wearing my CPF's. The Brass Biggies (as I call them) hang from the board at a slight down angle like the Vectors used to before I removed the ADM mechanism. I can still hit ton-40's with them though. The last dart is the Orion Vector Smart Dart properly configured. The ADM was too heavy for the dart and once replaced with a medium nylon stem, the dart flies like a dream!!

My buddy in Seattle came to the same conclusion on his own. He took the ADM off as well but still likes the dart for its grip.

Dart ornament and keychain-mini-frame: These are both quite nice. Every year my girlfriend and I exchange one ornament for the tree and this year she got me the little pueter dartboard. The little dart picture frame/keychain it pretty neat. I have been toying about using it for toting around a picture of my dog but since I don't really use a ketchain at all anyway I will probably just come up with picture of my dart team.
Posted by Zeeple at 9:09 AM

Happy Christmas Zeeple, and good to see you got so much darts gear!

I like the look of the darts at the top of the picture.

Thanks tommo. That is a good design and I have that design in a few diff weights. So far 20g is proving to be the best but I'd like to try 23.

The 20g GT2s, those are soft tip darts correct? Do they work well with regular hammerhead points (or j. pickup points)? I have a set of 21g GT3s and would like to try a lighter set, but has to be steel tip.
By the way, I have my new J. Pickup darts, if you'd like I can send u a pic (i have no where to post one). They are 21g and similar to GT3, but I have not yet adjusted to the change in balance (they are fixed pt) and am experimenting with different point lengths.

OC.. Thanks for the comments. I am definitely interested in seeing the Pickup darts. Send me a pic to my gmail.com account. It is zeeple@ (of course).

Regarding the GT2's. They were sold as soft tip but they are wearing spinpactor (hammerhead) points, and do just fine with them. I also have some 16 wearing pickup points in an earlier post... Also a good option.