I was please and surprised to find on my doorstep yesterday a set of darts which were sent to me from England. I am a participant on Steve Coote's dart forum over at www.stevecoote.com. Steve Coote is a well ranked PDC dart player who has earned his own signature dart from Datadarts: 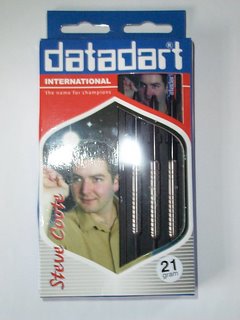 Steve was kind enough to send me a set of his signature darts and they are terrific. They are a 21 gram skinny pencil style fixed point dart whose texture is achieved with evenly spaced grooves. They throw quite well, and when they hit the board they do not produce the same kind thunk the heavier darts do. instead they slide into the sisal silently, and just stop; as if rigged with Dr. Who's Inertia Absorber. 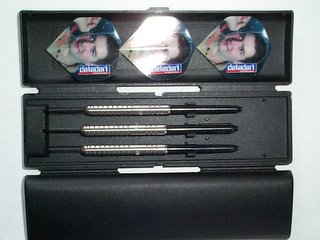 The case they came in is very nice. At first glance it appears to be the standard small plastic case that the Halex darts come in but upon closer examination you can see that it opens from both sides. On one side is the compartment for the darts as well as a slot for some flights and on the other side, extra tips, stems and flights can fit in there as well. 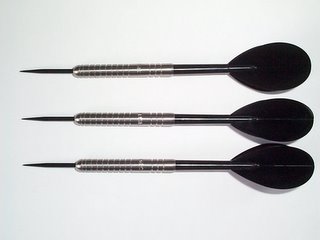 If Steve's photo flights had been pear shaped I would have been tempted to use them but since 1., I only have one set of Steve's flights, and 2., the black poly pear is my CPF, I figured I'd preserve the Coote flights and configure the darts right from the getgo. The stems that come with the darts are unique as well. They are an in-between length I have never seen before, measuring 1.75". Also notice there is writing in the space between the grooves. It says: MAGIC. Which is Steve Coote's darts nickname.

Very classy gift Steve. Thanks, and Merry Christmas!
Posted by Zeeple at 6:35 PM

What a great gesture for Steve to send you those. A team mate has a very similar set in 26grm, but not SC branded. I'll be getting a throw with them soon.

You're absolutely right, it was a very nice gesture and Steve Coote seems like a first class individual. I have had only minimal interaction with him on his forum but you can bet I'll be much more active now. The darts themselves have a terrific feel and I love throwing them.

I got new darts for christmass... check my blog... I also got a set of Unicorn XL nylon shafts... The flights pop out when the dart hits the board quite often... not like it is getting knocked off ... like the first dart that hits the board the flight pops off? Also one of mine bent or was bent when I got it... I figure it was manufacturer defect... (notice it was bent after about 10 minutes of throwing)... I even hit one and put a little dent in it... (that one is still straight) if it was aliminum it would have been trashed...

What do you think... also noticed A-Z has the unicorn XL plus (black ones) in stock now and you can order them... but they are 1/16 of and inch shorter than normal short shafts?

Sweet! I am heading over to check them out now.

Thats cool that Steve sent you a set of darts (I wonder if all members of his site recieved a set?). I'm not a member there, but I may have to check it out, if he's more active about participation than Paul Williams is on his site.

Whats even cooler than your new darts is finding out you are a fellow Dr. Who geek! ;-) My brother and I used to stay up late every weekend to see him take on the Darlick's or another foe...gotta love the telephone booth tartus.

I don't know about all members but at the very least myself and one other. They really are nice throwing darts. And sorry to disappoint but I am not that much of a Dr. Who fan. I have seen some shows and I definitely liked it but I was never a follower. I am more of a trekker.

Those DataDarts look very nice -- may have to try to get a set of those myself.

Good luck. There are a few of us that searched high and low for those darts. Turns out I don't think they are made anymore, and I am pretty sure Steve uses a different model in competitions.