Spinning Out of Control

Before I start comparing my spinners, let me say this: the Dynastar spinning flight system is far and away the best system I have seen. Nothing else compares. Having made such a broad sweeping statement, let me also say this: dynastar is a such a free spinning system that sometimes I think they spin too much. You can hold the dart in front of your face and give it a slight blow and the flight becomes a spinning blur. So if you like a free spinning flight this is the system you are looking for. You can get them in nylon or aluminum. 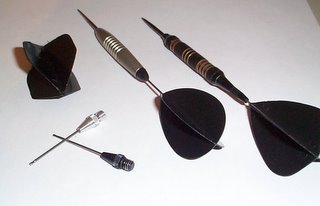 The next best spinner in terms of how freely it spins is the Spinster shaft. I do not personally own the entire shaft but I own a very unique set of darts that use the Spinster tops only for stems. One season I threw in Seattle a teammate showed up one night with spinster shafts on his darts. I remember being very impressed with how well they spun under the slightest breath. They are good looking and well made. They only come in aluminum, however. 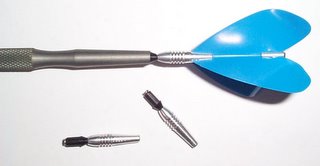 Other spinners I have that have a good spin to them but are unfortunately less attractive are the spinners that came with my Harrows Piranhas. They are a good short length, though. I believe they are called Top Spin. I would say that the spinners that came with my Great Whites also fall into the catagory of good spin but bad esthetic. Equally mediochre are the medium all aluminum all black spinners, and while these are plenty sleek the spin is a little tight. My worst spinners are those that are nylon or plastic with attempts at spinning tops. This is not to say that all nylon spinners are bad but mine surely are. They stay on the dart but do not spin freely in the least. If you want the benefits of nylon in your stems but want the spinning action get the nylon Dynastars and ignore the rest. 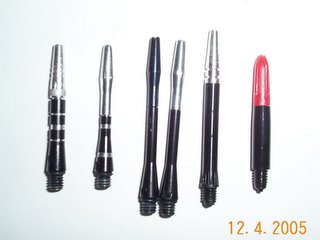 Free spinning can be bad. I have talked to guys that want the dart to be more or less stable and non-moving until such time as there is a flight collision and they want the flight of the first dart to spin out of the way. They don't want it spinning in the air, in other words. To me this is not an issue which is why I like the Dynastars. In fact, I like the Dynastars so much I actually modified a set to fit my GTs:

Dynastars have other qualities that should not be overlooked. For example, Dynastars cannot be robin hooded. The flights are a molded plastic so there are no mylar layers to separate. Also the stem part of the system doesn't have anything for an incoming dart to catch on and thus robin hoods are not an issue there either. Also, perhaps thanks to their method of having such a freely spinning flight, the Dynastar flights pop off quite well so between the spinning action, the easy popcorning, and the molded plastic, the flights last a long time.

Of course now is when I remind you that I don't use spinners of any sort anymore unless on a whim. I use ordinary short or in-between static nylon stems these days and do not feel the need for spinnners. But if you are into spinners, have a blast.
Posted by Zeeple at 8:54 PM

Zeeple
The problem that I saw in the Dyna-Stars is that they have a tendencency to bend And once that happened it was hard to get that spin back plus they are can of expensive, but they are one of the best spinners out there.

Hmm.. good point kdog. I have never had one bend on me but I can certainly see where that would be a concern. Thanks for the tip!

zeeple:
First, thanks for posting on this topic. I've only used the spinners made by Top Spin, as those are the easiest to find where I live. I find that they have a decent spin on them and the only problem I've ever had is that one got bent on a bounce out that hit the tile floor of the bar. My problem is that I can't decide if I like the spinners or not. I tend to kill my flights from every angle, so the spinners have helped with that. But I tend to throw better with non-spinning nylon stems (usually the 2" length). So I don't know. I'd probably do better just stocking up on flights. I was also wondering, why is it that you seem to prefer shorter length stems? What are the pros/cons?

Hi JB. I think the overall length of the dart is important. If you are using a long barrel you will need a shorter stem and while you are using a shorter barrel a longer stem. If my overall dart is too long then I end up hitting my face too, with the flight, sometimes.

I tried a little expiriment with spinners and although they did help with allowing my darts to go through the flights easier... I didn't like the rattle.. I went back to aluminum...

Going to try nylon and will probably order those ones from A-Z the XL's...

As for flights... I switched to dimplex instead of poly.. the hard poly's I was destroying very quick... the dimplex seam to hold up better and they seam to make my dart fly better... I think they are a bit smaller than standard flights as well?

I know exactly what you mean. It was that irritating rattle that made me wanna only use fixed point and static stems in the first place. I like the feeling of throwing one solid unmoving unit. These days it doesn't irritate me as much. The Dynastars do not have the kinda rattle you are talking about but I know some spinners do.

The Top Spin ones I use do have a little rattle to them, but I've learned to ignore it. I threw for a while today and am glad I started using them because, otherwise, I would have trashed my last set of flights, and I need them for Thursday night since I can't seem to find any standard size flights at my local stores. Hopefully my package from A-Z will get here soon.

Seems like the standard flights are the most common. Odd that you cannot find them readily. I have hundreds of flights. I always order five or ten sets when I order ANY dart stuff just to make sure I never run out!

That's what I thought, too. But I've looked at 3 or 4 sporting goods stores and there is an abundance of either the slim flights or flights shaped like skulls and butterflies. I finally found ONE set of standard flights last night at Sports Authority. The only option for design: a shotgun with an American flag backdrop. "You might be a redneck if..." Anyway, I was in serious need for flights since we play tonight so I bought them, even though they look horrible with my black/purple/silver darts. It's smart of you to stock up on flights. I'm attempting to stock up on flights and shafts (I don't know, I have bad luck), but my A-Z package hasn't gotten here yet.

Awesome. Almost nothing is more anticipated than a package from your favorite online dart retailer. My gf and I have a rule: we are not allowed to buy anything for ourselves for a few months before xmas... But she recieved a package in the mail the other day that looks suspiciously like a new dartboard!!

Anywho.. Stock up on flights and stems. I always recommend my favs so next time you make an online order, get yourself some plain black poly pear flights and some in-between length nylon stems. Merry Xmas!

The word I heard is that a lot of places aren't sell the Dyna-Stars because they are expensive and people are not buying them. The place that I get last minute things are selling what they have and ordering anymore, I think that they sell the shafts only at 15 bucks I forget what the sell the flights for.

Understood kdog. Thanks for the clarification. 15 dollars for dynastar shafts is highway robbery. I just checked prices at a-zdarts.com and the nylon dynastar shafts are $4 and the flights are $3. They may be a little bit more expensive than your standard stems and flights but if you are in the market for a quality spinner system then these'll do you right.

Ditch them spinners and make the switch to the best flight system out there...The Unicorn SlikStik Aluminum +

I've tried ALL the spinners out there, and IMO, this is a better option...and more durable.

What's the big deal with everyone and the slik stik? All it is,is a nylon shaft with a permant flight protector. Big deal that all you have to do is slide the flight through the slit. They wrap way to easy and once that happens the shaft looks like big eye of a needle. Even though expensive, I think that the Indestructo Shafts are one of the best. The only problems are they will not take nylon flights and you have to make sure that you "pre"load new flights before you put them on. Which means putting the flight into a set of shafts that have a wide area at the top. Let the flights stay that way for a couple of minutes before putting them into the indestructo shafts. I usually have 1 set ready to go prior to shooting in a match.

I have seen the slickstick in the local sporting good store and I was very tempted to buy a set but I didn't because it is so close before Xmas. Perhaps after the holidays I will try a set. My feeling is that they were designed with the standard flight in mind and that my CPF will shake loose.

And the indestructos seem like a pretty good idea but I have heard it is a pain in the rear to get flights into them because they do not give any at all. I have a set of wire stems like that and only very thin flights will work in them. I cannot even use dimplex flights in them.

Zeeple, if you place new flights into a set of old shafts fora couple of minutes prior to replacing the old ones it is a heck a lot easier than you think, I have been using the indestructo shafts off andon for about 3 1/2 years. Yes I have tore up some flights when replacing thema couple times you just to take your time and "pre-load" the flight the problem is cut to a minimum.

Good idea. I'll keep that in mind next time I have some tight stems.