Kudos to Unicorn for making a pretty slick product and kudos to SeaHag for suggesting I try them. I am talking of course about Slik-Stiks, which, if you have never heard of them is a stem designed to hold a flight securely by slipping the flight into it and then providing a built in flight ptotector to boot. I picked these up a long time ago and then stuck them in my dart box and promptly forgot about them for a long time. I rediscovered them tonight and decided it was time to give them a toss. As you can see in the photo below I have the short MX version which is still a little bit longer than a short nylon stem. 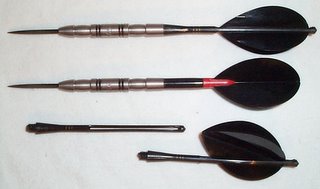 I threw a few practice games with them tonight and I have to say I am pleasantly surprised by them. I had some ill concieved preconcieved notions which prejudiced me against them for a long time. Now tyhat I have tried them I can say they are a pretty good product. I bought the nylon version since I prefer nylon these days but I am aware that they are done in aluminum as well for you aluminum afficionados.

One thing that worried me about them is that they are a one sslot device which made me think there would be nothing keeping the flight square (flight wings at a 90 degree angle to each other) and that the flights would have a tendency to be flat. Well as it turns out this is not the case and since flights are sold completely flat, the trick is to use the single slot to your advantage. It is done like this: in most flights you get thye phenomenon where two sides of the flight are about 95 degrees open and the other two about 85. Just squeeze the wider side together and slip it into the Slik-Stik and this will help keep the flight more square.

Another notion I had was that the slik-stik would be too long for my favorite flights (pear shaped) but this turns out to not be true either. I guess flights all come in a very standardized length (which is a good thing I guess). At any rate there was only one flight I could find that did not fit in the Slik-Stik. But since it is aa flight I am not tht fond of I really don't care.

One thing I can say about the slik-stiks is that with the exception of nylon flights, flights load into them very easily. In fact, I can see where this would be a hge advantage later in the evening when most of us are slightly less sober. Another apparent advantage would be that it seems like it would be really difficult to robin hood these stems. There is nothing for the incoming dart to really catch on.

I also thought that the single slot aspect of these stems could be a potential solution to the nylon flight problem. And that problem, as anyone who uses nylon flights is aware, is that they are almost impossible to keep square!! They are already almost too thick to be used in aluminum stems and once you squeeze them in the aluminum shafts will only keep one end square. And have you ever tried to get a flight protector on the nylon flights? Slik-stiks do solve this problem. It is aa little bit hard to jimmy the nylon flights into the Slik-Stiks but one you have them in there straight (as you can see form the photo below) they stay very very square. I could not fit the standard shape nylon flight into the slik-stik though. It was too tall by a micron. 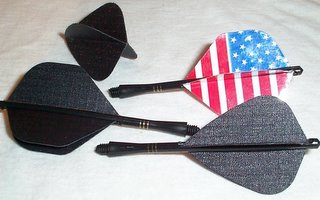 As they say to each their own. Tried them, and trashed them. To me they look like a big eye of a needle. Alot of shooters I know also trashed them. Rating for me don't waste your money.

Yeah, that's an interesting comment. I didn't have any collisions with them last night so I was unable to tell how they would hold up. They seem just a tad fragile but SeaHag would know better.

I tried a set of these during the summer and I didn't like them at all.

The first problem I had is that none of my flights would fit. I ended up having to cut a set of standard flights slightly to make it work.

The second problem was the shafts did a poor job of keeping the flights square.

The set I purchased didn't have Unicorn's name on the packaging. More than likely it was a cheap knock off.

Really? Poor job of keeping them square, huh? I found them to be one of the best products for keeping flights square but I paid a lot of attention to the angles on the flights and which side to insert into the Slik-Stik. Maybe the cheap knock off was just not made as well?

Glad you finally had an opportunity to try them Z. Just to clarify, the aluminum models (which I use) are not ALL aluminum. There is an aluminum threaded body that screws into the barrel; and a very resilient,flexible nylon protrusion from the aluminum which holds the flights.

I have tried just about every spinner shaft on the market and have primarily stuck with aluminum till I gave these a shot. Even the Alamo shafts made of nylon with the aluminum piece holding the flight, did not compare for me.

I find the flights are held more square with this design than anything I've tried...and I think that is because they are held along the entire length of the flight. The trick, as Zeeple referenced, is to make sure you are folding the two sides that weren't pressed together in the package through the slot together. If you simply grab a new set of flights and fold alternating pairs of the wings together, you will feel the set that has more springy resistance...those go throug together and lock the flight in place. When I have made an error in putting the flight in, I noticed the flights weren't as square and they also dislodged easier when hit by an incoming dart or on bounce out. Flights falling out with the slikstiks are a VERY rare occasion for me...better than any shaft I've ever tried.

They say different strokes for different folks...and there are some people who just won't like them. I approached them with a completely open mind, with the faith that Unicorn makes the best products in the dart world...and if these sucked, they wouldn't have their name on them.

A couple other things that slipped my mind.

I too have experienced a couple sets of flights that did not fit well. As Zeeple said, just a micron too long. I solved that by trimming that micron off on the pointy forward tip...then they popped in perfectly.

Durability has been unbelievable in my experience. I still have the first set I bought, a year and a half ago, now relegated to a set of "spare" darts...they are still straight and work well.

When I got them, and looked at the big "eye of the needle"...I honestly didn't know what to do with them. I searched all the dart sights to check if there were a special flight that was made for them...thats how foreign I was to the whole idea.

On DarterZ's web site, I took the opportunity to ask Ed. Lowry about the flights that the slikstiks would accept. He claimed ALL Unicorn flights will fit...but they are interested in ideas for branching out their line of flights; so if anyone has ideas of something new, whether shape or material, they are listening...just post a comment in the "Ask Unicorn" sections of your forums.

Thanks for the quality contributions SeaHag. Good to know that Ed is taking ideas for improved products. I'll have to give it some thought...