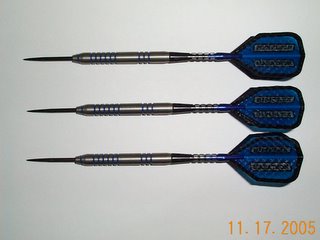 Z, these look like Red Dragon Darts, is that so?

These may be identical to some Red Dragons, yes. In fact, if you go to Nodor's website at www.nodorinternational.com you will see a range called the Dragonfly. The 23 gram version of this dart is the same as my County Cork! It is a real nice dart, and special to me because my wife bought it for me.