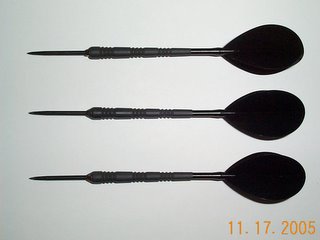 These are the 16 gram version of the popular GT3 line from Bottelsen. These are the "Black" version which is just a coating that eventually wears off. They do not throw as well as I would like them to, and certainly not as well as my other 16 gram darts. The other 16 grammers throw so well that I began to believe that 16 grams was the perfect weight for me and so I sought out that weight in my favorite dart style. Turns out the grammage is only one aspect of the "feel" of a dart and not all weights feel the same. I doubt these puppies will get much use but you never know. Here is the break down of them as pictured: