For those of us that wind up with dart collections, either by way of being in the hobby and slowly, unintentionally amassing them, or though serious collecting, there is the phenomenon of “the random soft tip barrels pile”. Many of my darts, especially my soft tip barrels, come by way of my father who actively seeks out interesting things at auctions. I am always grateful to receive what he sends, of course, but much of it is not something that I would spend a lot of time throwing in league or in practice. So they go into a container that is rarely opened or looked at. It happens.

Of all the types of darts that I have, the type I enjoy throwing the least, in general, would be the brass soft tip dart. Usually they are large for their weight and frequently esthetically unappealing. But I have slowly come to the realization over the years that even though the barrel is the heart of any dart it lives or dies by virtue of its configuration. You can take any expensive barrel and misconfigure it to the point that it is a non-throwable hot mess of a dart, and conversely, you can take what you though was a cheap, poorly designed, unattractive, too-big-for-it’s-weight barrel and configure it into something really nice. Take this one for example: 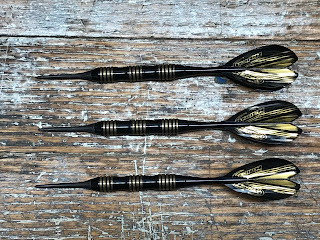 Something happens when a dart is nicely configured.  These barrels are unknown to me.  Could be Halex, could be Harrows, who knows?  I'll probably look them up some day but in the meantime, the barrels themselves did not strike my fancy in the least.  But then I took the time to experiment with them a little.  I found some spare L-Style conversion points that look nice on them, found a short marginally curvaceous stem and then when poking through my flights barrels, I came across the perfect flight.  Once I added those it all came together.  Something happened.  The darts became appealing to me and I started throwing them and started hitting good numbers.  No Ton-80's, but good numbers nonetheless.

Then I decided to dig into my random soft tip barrels pile and with patience found configurations for each of the sets that felt good and appropriate for each barrel.  I even discovered an 18 gram Bottelsen "Gap" in there that when fitted with a normal Hammerhead point, medium nylon stems and coal cracker flights flew straight and true.  Lot's of trip-20's with that config!

Moral of the story: don't dismiss random barrels too easily.  Be patient and find a configuration that works with them. You could have a hidden gem!
Posted by Zeeple at 11:09 AM