George Silberzhan's book, "How to Master the Sport of Darts", espouses the philosophy of "Aim Small, Miss Small".  Glib but nice.  I like the concept. It goes something like this:

The definition of a "miss" in the context of darts is that your dart lands outside the zone in which you intended to place it.  Simple definition that make sense to me.  If what you are aiming for is the entire dartboard, your misses are going to naturally, and by definition, land off the board somewhere.  Likewise, if you aim for an entire frame, a miss by definition will land in another frame.  Aim for the 20 wedge, and you will hit in the 1 or the 5 wedge.  Makes sense.  Extending this idea further, if you aim for the Triple-20, a miss by definition falls into something that is not the Triple-20, like the Triple-1 or the Triple-5 (or somewhere else).

Assuming that with practice you can narrow the range of your misses to just a small percentage of the diameter of your targeted range then you can further assume that the dart you aim at the Triple-20 bed will not be that far away from the Triple-20 (when they miss).  Daisy chaining assumptions is dangerous, but hey, practice needs to have some results, right? 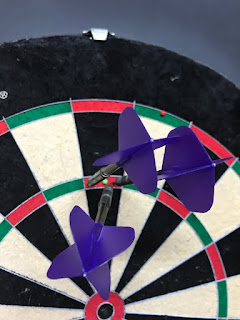 To help me practice this concept, I have taken small thumb tacks with tiny colored (red and green) balls on the end and placed them within the bed I want to hit.  In practice, when I hit the bed that contains the tack I am targeting, I pull it and place it to the outside of the scoring area of the board.  I do this because I usually randomize the doubles and triples that I am aiming for with a handful of 20-sided dice.  In the practice session above, you can see that I was aiming for the tack in the Triple-20, and over the course of several rounds hit the bed three times.

This also reminds me of something that I have seen many times over the many years I have been in league and thought I understood, but probably did not.  While chalking I would see a player, having missed the 60, after pulling his darts, poke the point of one of them right into the middle of the 60 bed one or more times.  I always assumed this to be a form of prayer.  The dart player was pleading with the 60 bed to attract his darts more better.  Now that I think on it more though, this was probably the player creating a hole in the Triple-20 that they can see, and aim at, allowing them to "Aim Small, Miss Small".

Damn.  I am going to start doing that myself.  Probably in practice before the match starts.
Posted by Zeeple at 12:42 PM