Week 1 was a nice start! 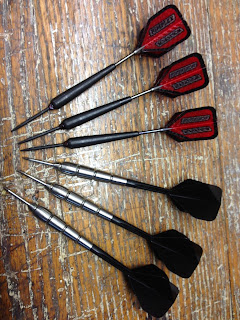 Last night went swimmingly. Two of my teammates I have known previously, three I met for the first time last night.  We won the match last night 17-8 against a traditionally strong team, The Dudes Abide.  My own performance was mostly satisfactory, but a little bit lackluster. I had one ton and a few 5 counts, but that was it for glory points. On the other hand I only lost one game all night and even that was a nail biter: Bill B beat me in singles cricket, but I made him fight hard for the win. Despite the loss, that was probably my most enjoyable and satisfying game all night long.

I really enjoyed playing games with my new teammates as well. They seem energetic, good natured and happy to engage in league play which is a very nice vibe. I have been trying to sell my team on the philosophy that this season is first and foremost an opportunity to have fun and spend time with friends, and secondarily an opportunity to improve ourselves as dart players. I really believe that!  I have captained many times before in my decade+ of playing league darts. But I have always only been a captain, filling out forms and interfacing with the opposing captain. This season I want to also be a coach. I want to help my teammates become better players, both mentally and in technique. I am interested to see how well I do in this regard. I am not completely sure how I will go about it, so I guess I'll just figure it out as we go. Job number one will be to