The second Paul Williams Darts Sweepstakes has come to a close and once again this time around I have won some very awesome prizes from the sponsors. The first is a Unicorn dart surround, and for those of you American darters who are not sure what that is, the Brits have an alternative method to the backboard which is the most common wall protecting device used in America (well... maybe the cabinet is the most common). See this pic: 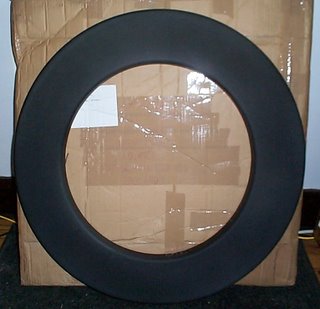 The surround, or at least the idea behind it is significantly different than the backboard. I like my backboard quite a bit I think I did a good job on it, and I like the idea of mounting my dartboard directly to it. I think it also protect a huge area of wall, and since it has a thin commercial grade carpet on it, no holes show when I hit it. I don't know if that will be true with the surround. I am told they last for years but if the rubber that is used is self healing is another matter entirely. The idea behind the surround is that you attach your dartboard directly to the wall, and then place the tight fitting surround around the board. I think when we move back to Seattle I will try the Unicorn Surround instead of the backboard but for now I will stick with my current method. This is nothing against the brits or the surround of course, it is just I have the backboard up already.

Nonetheless, thanks a million to Unicorn for the awesome donation to the Sweeps prizes!!

The second Item I got was a Tee-Shirt from Gazza at GSDarts.com. GSDarts is the sponsor of Paul Williams and is a terrific place to buy your darts supplies for several reasons. The first and foremost of which is that his shipping rates to the United States are absolutely terrific. He doesn't try to make a profit on the shipping and the shipping rates and speed of delivery is better than many of the big online darts suppliers in the united states. 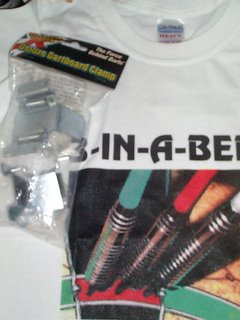 As you can see from the above pic I got a tee shirt (scroll down to the bottom) from him but also I got a Winmau Dartboard Wall Clamp! (again, scroll down most of the page) I am very excited about it and I hope to install it today in fact. The tee-shirt was a large, which was a nice surprise. Usually give away tee shirts are extra large (or larger) because they don't wanna have to have multiple sizes. Once I submitted a pretty good tip to a computer related site (I'd just gotten my first MCSE or something and was excited about it) and they sent me this tee shirt which was huger than huge. Seriously. But on the upside, I used that shirt to wash my car for years. The 3inabed tee-shirt actually fits me.

Thanks a million Gazza!!

The sweeps themselves are quite a lot of fun. The fact that prizes come along with it is just icing on the cake. The fact is I have gotten a tremendous amount of joy from it and the sweeps have really opened my eyes to the wider world of darts. I now know who the big names are in the sport and I have an interest in watching the player in action, in Blackpool or anywhere else. I still like baseball better as a spectator sport, but then they don't show that much darts on TV in the US. But baseball.. I can watch my choice of ten or more games everyday.

Nonetheless, I find myself following the Unicorn sponsored players and the british darts tournaments and I have Unicorn and GSDarts to thank for that, at least in part. So for them to donate these prizes to the Paul Williams Sweeps is quite a boon to the sport as a whole.
Posted by Zeeple at 10:35 PM