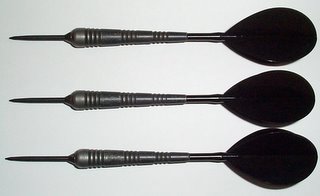 These are nice darts. Great feel nice throw and one day, if I ever start to prefer heavier darts again, I will throw them more often and practice with them. They are 27 gram moving point GT3's by Bottelsen, with the black coating. The coating hasn't worn off as much as they have on my GTs, but with use I am sure it will. Exact same size and shape as the GT's but with three sets of angled grooves in the barrel for texture, and likely that is where that extra gram went. I bought these darts for $30 from a bar owner in Seattle. A long time ago he offered to sell me them for $30 and I declined, then a year later he tried again but for $50. I reminded him of the $30 offer and bought them. I am glad I did.

He must haave bought these before Bottelsen started threading the back end of the barrels. When I bought them they were completely smooth (inside) and would only take a puch-in type stem. So I borrowed them to aa friend who broke off a tap inside one trying to thread them for me. I figured they were a lost cause at that point so forgot about them. Then one day I decided to see if Jeff Pickup could make a duplicate to replace the one that had a tap stuck in it. He did me one better. He bore out the tap and then threaded them for me!

Here is the break down of them as pictured: