Reign of the Hat Trick +1

Hat Trick +1 is the term I have come up with to mean a four count in the bulls, in which all of the darts are in the bull somewhere. So two double bulls and then a miss outside the bull doesn't count since it is not a hat trick. Oddly I have had several of these lately but not much else to comment on, performance wise. 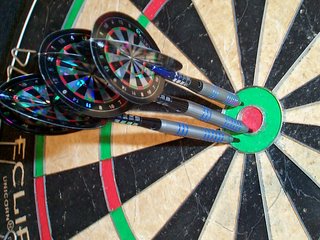 The only meaningful HT+1 that I have hit was last Tuesday in league, and while it came in a cricket game that my partner and I eventually lost, it bolstered my confidence for a while. But only a while. I got clobbered by a sandbagger shortly after. And I mean seriouly clobbered. It was almost the darts version of a mugging.

Bear in mind, though, that when I get to choose I always choose to play against the other teams strongest player even when I know in advance that I am out classed. There is no glory in defeating a weaker opponent and there is no honor in avoiding the toughest possible challenge. I am a bit like Lt. Cmd. Worf in this respect. And last Tuesday I died honorably in glorious battle. Happily I was able to choose my opponent.

It was a Singles Chicago match. He won the initial cork and chose to open with cricket. He beat me soundly that game and was 80 points ahead by the second round. I nearly came back in the end by pounding the bulls and ended up with over 100 points but still lost. He was very strong on the triples and I was missing them.

I chose DIDO 301 as the next game. I got in by the second round but I never had a chance. He opened with 48 points, and then hit a ton-40 in the second round, and then took out 113 in the third round. I was very impressed and he exhibited excellent sportsmanship in terms of attitude, etc, but he was still sandbagging the B League. (I say that with a half crooked smile.)

I digress. The subject line of this post claims that there is a reign of HT+1's. I say that because I hit several in the last few days, and several yesterday. Here is another pic of a Hat Trick +1: 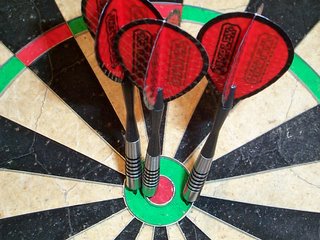 Those dartboard flights are interesting. The seem circular?

In our league the pairings are drawn randomly by the captians before the game using name cards placed face down on the table.

As I found last week, if you're the Away Team and your name is drawn third you are throwing "against the darts" in all three of the Team, Doubles, and Singles games.

The dartboard flights are not completely round, they are more of an oval, and they are called Axis flights. These are the only Axis flights I have and I'd have never bought them. They were gifted to me by a teammate who borrow some of my darts for several weeks before she got her own. I do not have an opinion on them yet.

What do you mean when you say "Playing against the darts?" Do you not have opponents to play against?

For "playing against the darts" I just meant that your opponent throws first. A real disadvantage if you're evenly matched.

I've never heard that phrase before (at least not used in that manner). In our league we always have one person from each team throw one dart at the bull. Closest goes first. I am surprised that there is any deviation from that at all for you!!

In our league the Home team has to fill the roster out first. Then our half of the sheet is covered up and given to the Away team. Then they fill out their side and the first game is called.

Home team has the option to see or show on the cork.

Yup, same here. The home team has the duty to fill out at least two boards worth of games in advance, and then the visiting team has the privilege of choosing who to pit against them. The only place I have seen it done differently is in Seattle, where the home team and the opposing team take turns filling out the roster first, two boards at a time.