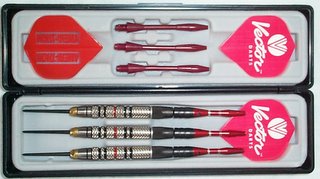 So my new tradition is to buy a new set of darts for a good buddy of mine who is also into darts and who was on my old dart teams when I played in Seattle. He's a damn good shot as is evidenced by the 141-Out he hit in practice last night. Anyway I try to get him stuff he wouldn't get for himself and since he is a good friend I do not mind dropping a pretty penny on the good stuff. The other route I go is to get something unique.

And of course, I usually get a set for myself in the process ;)

This year I got him some "Vector Smart Darts with ADM" from Orion Vector. I'd seen these darts a long time ago and have always been intrigued. Everytime I go dart surfing I hit the Orion Vector site just for the sake of it. The guy there has some good stuff. He's got some nice looking reversable darts (which is just another way of saying it is 2ba threaded on both sides) which I breifly considered getting. But the Vector Smarts are the unique set.

They have an undeniably great grip but they throw really weird. The steel section screwed into the back of the barrel that has the swivel makes the whole dart very long. So even if you use very short shafts you end up with an odd balance. Steel may be lighter than tungsten but it is not lighter than nylon or aluminum so you end up with the equivalent of a very heavy shaft. I use micro length aluminum stems on mine but the darts still end up leaning down in the board after a hit. As you can see from the photo below, extra short aluminum shafts are included, but extra short is still too long in my opinion. 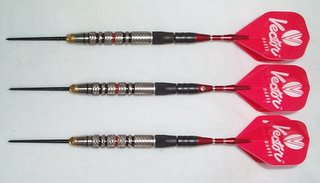 Nice looking darts, and well specced according to their link.

Have you seen the Natural Aluminium "Mini" stems on page 2 of your TDI catalogue? They won't help with the balance problem, but may be worth a try if you're ordering other things from them.

I looked it up and guess what? I am using the TDI Mini, only difference is that the site I bought them from calls them 'Micro' instead. Good call Tommo, and it helps some on the balance problem. I should probably use a bigger flight but I like my Black Poly Pears!

I'm thinking of adding some Minis (or Micros) to my next order. I'm just really curious to see how it affects the flight of the dart. They seem to attach the flight almost directly to the barell with virtually no stem at all. Could you try them on one of your "ordinary" sets and let me know what the results are please?

I have tried the micros on a lot of different darts and they do not work well for many of them. The biggest problem is the flight hitting your fingers during the throw. Other than that they are great. There is one guy in our league that has darts very similar to the AG Originals and he uses Micros on his darts. He's a swell guy and a good darter and he cleaned my clock more than once in darts. He finds them affective. For me it really really depends on the darts. Look at these two pics:

I think you should get some just for the sake of experimenting. But that's coming form a guy who has too much dart stuff ;)

Thanks for that. I don't think I'll be getting any though, as I mocked up a dart with Blu Tac to represent the "Micro", and as you say the flight is too near my index finger and catches it as I grip it.

No Problem, Tommo. Glad to be of service.