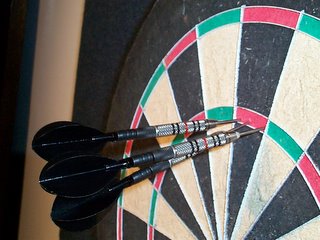 Well I did it again, this time though it was quite special in more than one way. I have only had the darts for less than a day and had not thrown them at all until just a bit ago. I tossed a few at the bull, and a few doubles, etc. Then, believe it or not I decided to try for the triple 20 and hit the ton-80 in my first ever attempt with these darts! That's gotta be a good omen. I have not decided how I feel about the darts yet, but this sudden bout of performance is certainly warming me up to them.

About an hour after the first Ton-80 occurred I got up to practice again. This time I hit another Ton-80 followed immediately by a ton-20 and a seven count in the 15s. This is the first time I have ever hit two max's in one day. These darts are really something special. I have modified them somewhat though. I put shorter shafts on them, my CPFs and also swapped out the points that came with them for Pickup points. Below is a pic of the First Ton-80 (8th lifetime) (the second Ton-80 is the pic in the post (above)).

That is brilliant. Not just the 180's, but the other big shots that are following them. I absolutely knew a break would do you good.

Thanks Tommo! The break is still in effect though. I just put the board up for a little while since I got some new darts ina nd I could not resist a toss or two. The board is back in the basement!

You're well ahead of me. I'm stuck on #3...and its usually weeks in between them.

Thanks SeaHag. I appreciate the good thoughts. I was surprised by it myself. Perhaps it is the "new darts" version of beginners luck, but I'd loveto try my hand against you sometime with these new darts if you're ever up for a match.