Being the B League caliber player that I am, it is rare that I hit the same triple three times in a row. I have only hit three Ton-80s in my darting life. Here you can see that I hit the trip 19 three times in one round during practice one night. Needless to say I was thrilled and whipped out the camera immediately. The only other nine count that I remember hitting (not including any ton-80s) was one night after league. We were at a tavern called the Knarr, the match was done and we were just hanging out shooting more darts. In a game of cricket, I had a less than spectacular first round, and then in my second round, I borrowed my teammates Laserdarts Black Eagles and proceeded to hit Trip 20, Trip 18, Trip 19 in that order. The best part? Witnesses, of course. 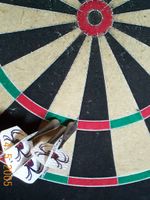 As always, click the image for a larger picture.
Posted by Zeeple at 1:52 PM