Even though tapered darts are by far my favorite barrel style, I only have two sets. The first is 28 gram Smooth Black Bottelsen GTs. The second is 24 gram Smooth High Tek Bombs. There are elements of each dart that are very good and elements from each that I do not like. I'd prefer fixed points on the GTs and from time to time I put conversion points on them but that destroys the esthetic. The coating comes off very easily and the forward portion had rubbed off within a few weeks of having them and now, after almost three years, the coating is faint and almost entirely gone. The sstems are improved now that they offer the screw in variety, but before they were attrocious. Horrible push in jobs that wobbled and shook loose after every other throw. I will not be buying any more GT's as I have just heard from them that they have no plans to make a fixed point version. Nonetheless, until I can have a special set custom made by some lathe jockey, this is my favorite set of darts.

The Bombs are nice darts. I paid about 85 dollars for the Bottelsen GTs, and about 18 dollars for the Bombs, and they are nearly the same dart. The Bomb is fixed point which is better, but the GT's have a more salient taper which is a the key ingredient, thus giving them the edge. The Bombs suffer in this regard because they can only taper down to a certain width since they need a 2ba stem. The GT's have a very narrow threaded opening for their proprietary stems, which are more expensive and harder to get. The Bombs have the advantage in this regard because you can get 2ba stems anywhere and in a variety of lengths ans styles. The Bombs are 24g which is a better weight, but the GT's have such a superb weight distribution that the extra gramage is not noticed.

One nice feature of the tapered dart is that you grip it around the front most portion, where the taper begins. Making for a very solid no-slip grip. Thus no knurling or rings nor any other gripping texture is necessary. 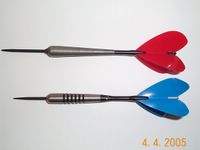 As always, click the image for a larger picture.
Posted by Zeeple at 7:16 AM

I was just trying to figure out if
cut the shaft or what, that looks like the lenght of shaft I would like to use

No, if you are talking about the GTs then that is their own specially produced shaft for that (and a few other models) dart. And they offer different lengths too. I think that is their "medium" even though it is shorter than most short stems.

thanks for the info, i cant use
them i have unicorns