Years ago when I was more active in the online dart forums I received these darts, which are Steve Coote's 21 gram signature Datadart, as a gift from the man himself as a thank you for being active in his online community.  They have proven true for many years, and I have to be honest, I do not think this is the first maximum to come off these darts either.  The Ton-80 below came in practice. Lately I have been working mostly with my Nobu's but from time to time I pick up another set (usually chosen completely randomly by a throw of dice) and throw a quick 301 to break the practice up some.  Especially if the 60's are few and far in between. 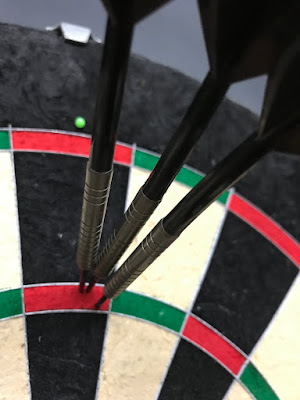 Practice lately has been worrisome to me.  The 60's are indeed few and far in between and worse, my groupings are not very tight.  Sometimes my throws are so scattershot that I wonder if I have forgotten how to throw a dart entirely.  But last night I also hit a faux max (in addition to the genuine Ton-80 pictured above), and better: the three 60's were sequential.  Two were the last two darts in the previous round, and I plucked out my initial 1 or 5 or whatever it was and gave it another toss and hit the 60 again.  These are the small encouragings that keep me going, I guess.

The Coote's above are wearing medium standard condor flights.
Posted by Zeeple at 7:34 AM