In fact, I'd say it was more good than bad, personally, but now that I think on it, it could not have gotten too much worser for the team as a whole.  We were walloped 17-4.  But it was nice to be back in Coopers playing darts again.  For years and years that was my teams' home bar and I even took the time to seek out a plaque with my name on it up on their trophy wall.  Seems like many of them have gone missing.

The night started off exactly right.  I got there an hour before play started to warm up, have a drink, and relax.  Several of the opposing players were there and one of them, quite a good darter, was down for playing some old school warm up games.  First we played Golf, exactly as described in Captain Everson's book, and then we played a game of Halve It, as described in The Little Red Book of Darts, except as you can see from the score board, we played with 12 targets instead of 11.  Both games were fun to play, and I enjoyed meeting the opposing player in this way as well. 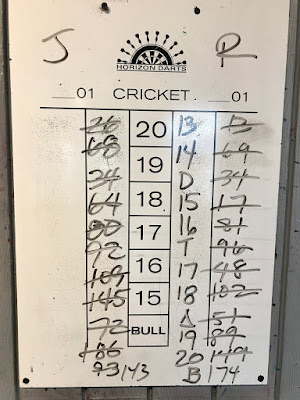 As mentioned, the team didn't do well over all but I did mostly okay.  I would like to have hit more tons, but I did hit a decent amount of 60's over the night, and the highlight of the night was a cricket win that contained two 7-mark rounds.  I played two singles games, a 401 and a cricket, and won them both.  I also played four doubles matches, two 501 and 2 cricket, but only won one of those: a cricket with Henri.

My only singles 401 was against Jeff and it was a good one.  I opened with a Ton, hit four triple-20's during the game, and eventually took out 12 by going: miss outside, single 6, double 3.  To my credit though, I hit the double 3 with my first shot at it.  I remarked to my opponent that I couldn't remember the last time I hit a double 3 on purpose, and outside of practice that is certainly true!

My only singles cricket was also a good game, a win against Dave.  We were both playing well, and in fact he had a 5-count in the 19's early in the game but I was able to out shoot him, barely, for the win.  I didn't have any spectacular rounds in the game, but it ended with a score of 180-168, and I had a 2.1 average for the game.

Doubles mostly sucked.  My first doubles 501 was with Dani, and other than opening the game with an 85 I threw rubbish, including several misses at the out.  They out-darted us plain and simple.  My second doubles 501 was with Julia and that was also a loss.  In that game I hit a late Ton but it wasn't enough to catch us up.  Out-darted again.

My first doubles cricket was with Henri and it was a fine game, and a win.  We started slow and got in the hole fast.  Henri and I both threw goose eggs in our first rounds but the other team did not.  However, at about mid-game I hit a 7-count in the 19's catching us up in score, and in my penultimate round I hit another 7-count: triple 16, triple-15, single bull, which caught us up in numbers and gave us a good shot at the win.  Next time I was up I hit a double bull for the win.  Here is the last 7 Mark: 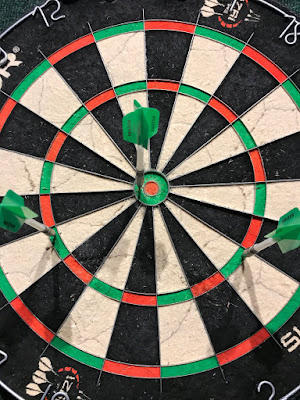 The last doubles cricket was with Chris, and a loss.  Both teams seemed spent by that time.  As a testament to this, they beat our 1.1 MPR with a 1.2!

The darts I brought with me last night: 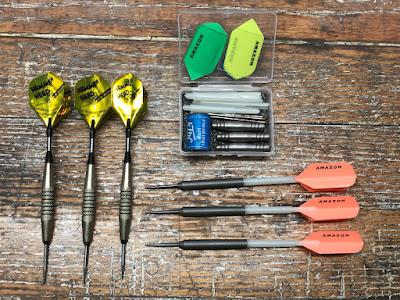 The Nobu's and the Coppers were my mainstays, swapping between them freely throughout the night.  They both threw decently well.  The Hammerheads didn't come out until the team game, and I did not throw any tons with them.  One interesting occurrence in the night was this: 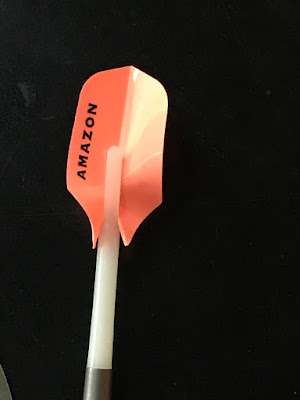 Another dart came in behind it and drove the flight into the Twin Grip stem, partially splitting it.  The wonderful thing about this collision, and Twin Grips in general, is that all I needed to do was remove the flight, rotate it 90 degrees, and put it back on the stem.  Just.  Like.  New.  Of course one more such collision and the flight will be completely spent, but that's quite all right.

Over all a good night out playing darts :) 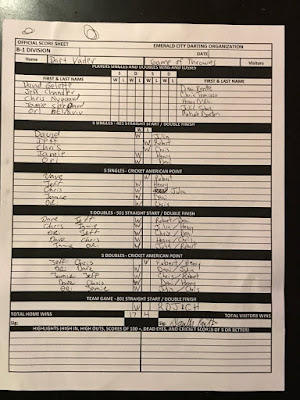