The second match of my 2019 Spring season was a bust, personally.  The highlights were both related to the people and the place.  The dart alley as you can see in the pic below was, if a bit narrow, beautifully done.  The next time I go though, I am going to take a toe line checker with me as I am certain the board were a tad bit close to the oche.

The second highlight was that we played against a team of friendly, fun to shoot with darters.  The food is supposed to be good too, but I didn't get there in sufficient time to get a bite to eat. That's okay though because I have gotten out of the habit of eating before a match.  Food coma! 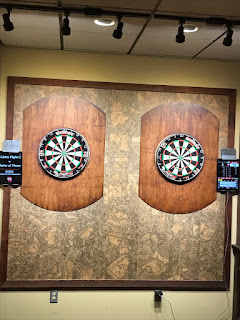 My darts sucked.  That's all there is to say about it.  I won two games: a singles cricket, and a doubles cricket, and lost the rest.  The team game was also a win, and I scored a 100, but those points are lost forever due to a technical limitation of the software we use to score games.  But don't get me wrong; I am not sad over a measly ton, even if it was fully half of my glory points for the evening :/

My only 401 (against Steve) was a well deserved loss as I had 4 darts at the double before my opponent took it out.  It was a nice dramatic turn-around win for him though.  in our second last round I was sitting on 55 and he was sitting on 148. I whittled my 55 to 16 with 2 darts and missed the out with my third, and he scored a ton.  Then in my next round all three darts at the 16 were outside misses and he took out 48 as pretty as you please.  With 2 darts no less.  So good on him for a nice (and probably quite satisfying) win, but shame on me for so many misses at the out.

My first singles Cricket was a win against their captain, Jeff, was my only singles win.  There was nothing remarkable about the game, other than that I threw a solid 1.8 MPT and I feel that I won because I was just slightly more solid than he was that game.  I like him immensely.  Good guy.  My last singles cricket was a loss against Nick, also quite a like-able fellow and a good sportsman to boot.  The story here is simple.  He threw a good game, I did not.

My doubles matches were unremarkable.  The one win I had was with Henry and I opened with a 5 mark round on 20's and 19's.  We eked out the win but not by much.  In one of the doubles 501 losses I hit a ton and in one of the doubles cricket losses I threw quite well, but we still lost.  During that game I put up 18 marks, which I have no idea what it does to my average. 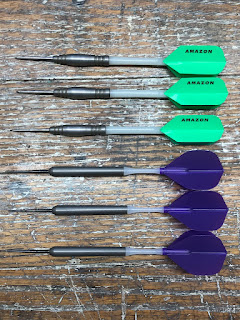 I alternated pretty evenly between the two sets of darts above throughout the match.  On top, same as last week, are the 19 gram MP Nobu's with medium twin-grip stems and smooth poly slim flights.  The bottom set are the Dagnabits, of course, with short non-spinning FitFlight stems and standard FitFlights on back.  I threw equally unwell with both sets.  Next week I am bringing a single set: the Nobus.

I am not even really sure what my problem is.  Perhaps I am expecting too much from myself at this point in my return.  Perhaps my former success in darts was the result of consistent practice over the course of years.  I have been out of league for 4 to 5 years so maybe I just need to get back to basics and practice every day.  Here is my assignment for practice over the next week:  everyday I must hit 5 bulls, 5 60's, and 5 random doubles.  Then thats it.  My shots will not be rapid fire, but rather focused and paced.  My throws will not be weak, but rather forceful.

Next week we are at our home pub.  Looking forwards to it! 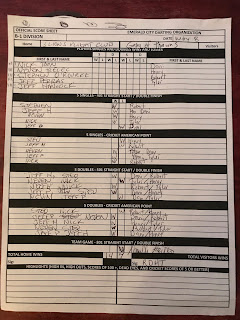