Last night was my last league night of the Spring season, but hopefully not my last night playing on Game of Throwns, which is quite a fun team, if not high ranking in the stats.  There is one more (make up) match next week but I am unavailable to play and then playoffs occur in the ensuing weeks, which Game of Throws will not be a part of.

My performance during this season, which is my return-to-darts season, has not been without some excellent outings.  A Ton-80, and several strong games in general, including one cricket that contained two 7-counts.  Last night's match was not one of them however.  I did not crash and burn, but still, it was merely a meh outing.

Here is how the meh-ness broke down: I played two singles, winning but one, and I played in five doubles matches winning but two.  All of my wins were cricket, and I did not win a single 01 game all night. 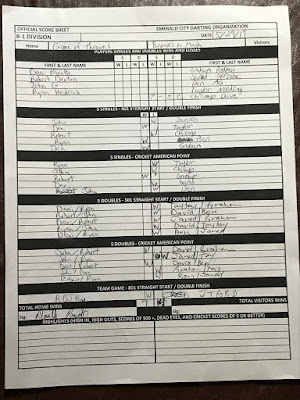 We started off with the team 801 game in which I hit no tons, only ever hit a single triple 20, and missed a 78 out, leaving 40 for my captain, who took it out next turn.

Next up I lost a singles 401 game against one of their better players, Dave, in which I hit my one solitary Ton for the night, then proceeded to spent six rounds missing my out shots until he took out his.  My outs have been quite weak this year.  Before fall season starts, I need to find my way back to my old can't-miss-the-doubles self of previous seasons.

Next up I won a cricket match against Graham, who is not a bad darter in his own right.  It went like this: I opened with four 20's, getting ahead in points early, and for the most part I stayed ahead in points this game.  Later I had a 5-count in the 17's and pretty much did not miss the bulls, hitting a double bull to win the game in my last round.  There were no goose egg rounds for me at all and I had a 2.7 MPT that game which was quite welcome.  This game may have served to restore some confidence for me.

Next up I lost two doubles 501 matches with John and then Dani.  During those games I hit no tons and missed my outs, although in the second game I opened with an 85 and hit one other Triple 20 in the game.  These games were quite lackluster for me.  I need to do better with my 60's and my doubles.  Perhaps over the summer my practice routine can be "Modified Around the Clock".

Next up I played three doubles cricket games, one each with all of my (three) teammates, and the only loss was the last one that I played with Ryan and it was a doozy.  The first with John went like this: I opened with 2 20's and didn't have any high mark rounds for the entire game.  I also didn't have any good egg rounds either, and in my last two rounds hit three bulls for the win.  It was a close game but we just barely out-darted them.  My cricket match with Dani was about the same.  A win, but not because I wowed anyone.  We eked out that win.  My last cricket with Ryan, a loss, was a fun game.  The final score ended up being 406 (them) to 318 (us) and while I was strong on bulls that game, it wasn't enough to overcome the opponent's strong play.  They were on fire, we were not.

These were the darts I brought with me: 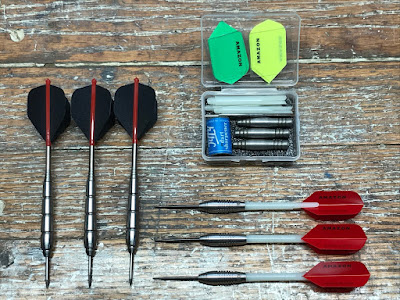 The intention was that the Unicorn chrome plated brass torpedoes would be the set I broke out for the team game, but between playing the team game first, and doing lousy with the Colonials during warm up I decided to spend the Colonials on the team game and let the Torpedoes be my alternates for the night.  It was a good call.  I threw some decent rounds with them.  The Nobu's were my mainstay, as usual.

I may be invited to play in a "best of" singles tournament at the end of play offs but I am not completely certain about that.  If not, so long spring season!
Posted by Zeeple at 8:09 AM