How to Master the Sport of Darts

I recently reread one of my favorite dart books.  It is called How to Master the Sport of Darts, by George Silberzahn.  It is not my favorite because it offers sage advice on how to play darts (though it does) but rather because of the hidden gem inside that you would never even guess at from the title or the cover: the entire second half of the book is called WYBMADIITY, and it is dedicated to American darts legends reflecting on their careers. Good stuff. 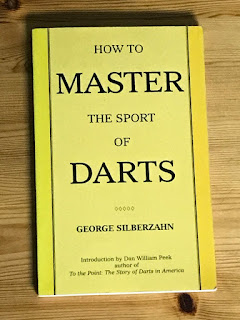 The first half of the book is aimed at those new to the sport, I think, as it offers solid advice on how to practice and how to think about darts.  I will not dwell on this part since I personally did not get that much out of it, but that is not to say that it is not worth your time to read.  After all, Mr. Silberzahn is a darts legend himself, well laden with his own accolades, and what's more, he has dedicated himself tirelessly to helping dart players all over the world become better darters through schools and online forums.

I want to spend a few moments jotting down my take-aways from the section called WYBMADIITY.  This section really spoke to me and I am so glad Mr. Silberzahn took the time to include it.  Listening to legends speak about their careers and what darts was like back in the day is immensely enjoyable and quite engrossing. I need to spend some time interviewing dart players myself!


First, throughout all of the legends I noticed a few commonalities that are worth noting:


Now on to the Legends.  The numbers after each point is the page number and paragraph where I pulled the info.  I don't know why I started doing this, but I forgot to do it with some of the later legends.  I guess so if I ever wanted to go back and get more context I could.  Sounds like something I would do.

Anyway.  Those are the American Darts Legends covered in this book.  I highly recommend this book.  Fascinating read!