I believe very strongly that these are unicorn darts and are quite old (40 or 50 years) but I am not 100% certain because I cannot find them in their online heritage catalogs.  There are a few reasons why I believe them to be Unicorn. Four reasons, in fact.

First, I know for a fact that Unicorn has made other aluminum darts.  I used to have a set called the Unicorn Bantam which had a brass nose and the rest of the body was aluminum (those were only 10 grams).  Secondly, while I did not see this particular dart in any of the online catalogs, I did see plenty of brass torpedo darts that have the same body.  And I mean exactly the same body. But as we all know, the torpedo shaped dart was not unique to Unicorn.  This brings me to the third reason I suspect it as a Unicorn offering, and that is the ring pattern starts early.  The first ring is just millimeters back of the point, which as far as I know, was a ring pattern common to Unicorn darts, but not necessarily others. 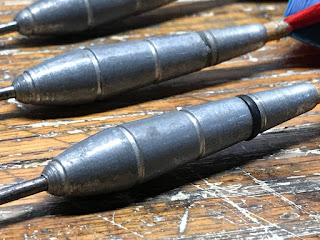 The below pic provides a better view of the overall dart in which you can see the torpedo shape more saliently. 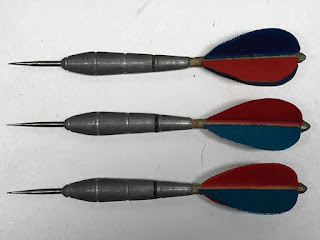 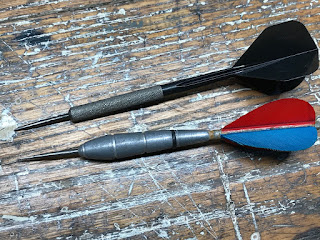 The last reason I believe them to be Unicorn darts is because when I acquired them they came in the below case, which says Unicorn on the top.  This is no silver bullet however (second favorite dart pun :), because darts get rehoused in different cases all the time.  I have done it myself more times than I can shake a stick at, and these darts have had a long life thus far to have been rehoused.  That said, the darts do fit pretty perfectly in the case. 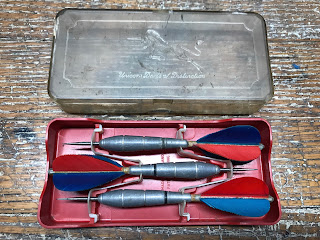 So there you have it.  Anyone ho has any informations on this dart please feel free to contribute!
Posted by Zeeple at 7:39 PM