My Best Game Ever

My best game ever occurred one night in my favorite dart bar, Coopers (in Seattle) but it was not a league night.  Rather I was there playing darts with two of my neighbors.  It was very casual, zero pressure, and it was more about three neighbors socializing than about darts.  Darts were the backdrop.  The side-by-side activity that allows men to socialize in the first place. (What do I mean by that? Men socialize differently than women.  Women tend to have "face to face" relationships where they are happy to sit and talk while doing absolutely nothing, which is a very strong form of bonding for women (in general).  Men on the other hand, bond equally strongly in the opposite manner: "side by side". We perform some activity together, frequently saying absolutely nothing in the process. (These are generalizations, not absolutes, obviously, and not original with me. I learned this stuff in a psych class in college :))

And kudos to you if you were able to follow the nested parentheticals.

Where was I?  Oh yes.  My best game of darts ever. It was a fifteen darter that started with an impressive three tons in a row, followed by a 41, and then I took out the 160. With witnesses, against two neighbors in friendly competition: 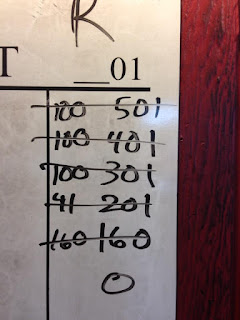 The icing on this deliciousness would be the highest out I have ever made: 160.  Again, witnesses and everything: 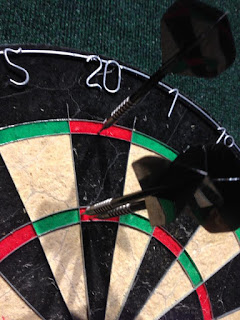 Of course, it came at some cost, as all good things do.  one of my neighbors was royally pissed off at me and to this day refuses to play darts with me.  But thats okay.  We are friendly to each other, stop to chat in a very friendly manner when we see each other in the street or the yards, etc.  He borrows my power washer every year and I very happily borrow it to him!

This game occurred in July 2015 but I was not blogging then and I never thought to throw it up here, or update the side bar.  Now that I am sliding back into my former dartphilia I want to blog it so when I am old and grey I can remember it fondly.

According to the photo, I appeared to by using my 20 gram Monster Hades wearing medium standard Condor flights (which I love near to death).
Posted by Zeeple at 3:47 PM