In 1933 the United States was in dire straits, financially. The Great Depression was in full bloom and millions were out of work. Our newly elected president, Franklin Delano Roosevelt, loved by many and for good reason, hit the ground running. He implemented what he termed “a new deal” for the American people, aimed at providing work for the unemployed, and with that work, dignity and self respect. One aspect of this new deal was the Civilian Conservation Corps (CCC).  The CCC was put to use rebuilding, improving, and creating pubic spaces in America and our national and state parks benefitted tremendously for the effort. I am not a historian, nor am I especially knowledgeable in this or any other area of history but I love the CCC nonetheless.

I was lucky enough to be able to visit the official CCC museum in Florida recently and was happily surprised to see that my favorite hobby (I won’t insult you) ostensibly overlaps with this finest (if erstwhile) of institutions. Enjoy if you will, the following pic: 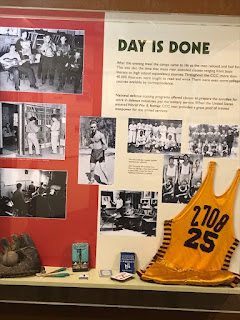 Note the darts on the shelf in the very bottom of the pic. They look period enough, don’t they? I love the idea of these young men playing darts at the end of the day in a camp deep in the woods after a hard day of improving a park. As an Eagle Scout I can tell you that there is nothing more satisfying than knowing you have improved a public space that will be enjoyed by many to come, but the idea of playing darts afterwards is even better. The finer, unstated, aspect of this is that these camps were undoubtedly dry camps. It is unlikely they would allow alcohol to be consumed by hundreds of womenless, exhausted young men, after all, and so these games of darts would have been shot with (mostly) clear heads and with a heightened desire of winning. If indeed darts were played in these camps, then I am certain they would have produced a number of superlative players. 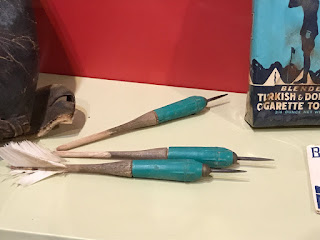 But something doesn't seem right to me here.  I am not a dart historian by any stretch, but from what I know of darts in America, before the 70's (and the CCC lasted from 1933 to 1942) the English dart game was pretty much unknown so any darts that would have been played in these camps would have been the American Dart game.  If that is the case, and I understand my darts equipment history well enough, that would mean throwing light weight wooden darts at wooden American dart boards.  The darts above look like a dart designed to be heavy enough to land in a sisal board and was therefore probably made in the 60's or 70's.

But I don't really know.

The cynic in me says that what we are probably looking at here is a stylized window display that was cobbled together not with actual CCC artifacts, but rather with the sorts of things the window display creator thought would represent camp activities well enough.  I am going to do a little research if I get the time and see what I can discover.  I could try to discover who created that display, for instance and ask them.  I could discover what company made those darts, and also try to determine when that company might have existed.  I could read a book about CCC camp life.