A Big Thank You to 3inabed.com

Just as I sent out a thank you to Delboy, I would like to extend a huge thank you to Gazza at 3inabed.com for the prize contributions to the Darts Sweepstakes over at www.paulwilliamsdarts.co.uk. It was a terrific contribution and I am very grateful to his generosity. The sweeps that Nick Williams runs is a nice contribution to the ODC and it is the prizes offered by Gazza and Unicorn and Delboy and others that adds to the excitement, and we are all better off for it. So Thank you Gazza!

The prize I got from 3inabed.com is pretty cool. It is a set of 26 gram Nodor darts that are really nice looking and have a good feel when thrown. They came in a nice case with three sets of shafts and two sets of flights. 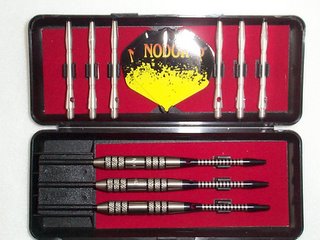 I have been aware of 3inabed.com for quite sometime now, but I never really explored the site thoroughly until I learned I'd be getting a set of darts that was offered by Gazza in the sweeps. The site is prtty extensive and there is much to see and do there. There is a nice selection of darts for sale, featuring mainly the Nodor line, all of which are good looking darts and which seem to be priced quite resonably. In addition to the darts he sells accessories, shirts and his PC game.

The PC game was one of the prizes offered in the sweeps, but since I am on a Mac it isn't much use to me (at least not until Darwine provides and exe environment). And the site features a world league which you can participate in if you happen to have this PC game. But it doesn't seem to be web based, per se, like www.ezchalk.com. 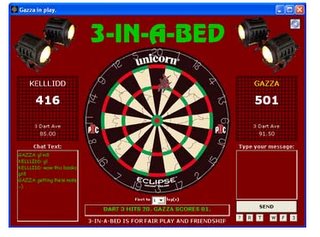 The site has other interesting tid bits as well, such as a page of links (hey! why isn't The Dart Indoors in there!), a section for discussion and news, and "flutter" which seesm to be something to do with gambling.

Anyway, 3inabed.com has contributed selflessly to the online dart community by offering prizes for the sweeps and it would be great if anyone reading this would take some time and poke around his site, and consider buy stuff from him next time you need supplies. You can find his site here:

Hey Zeeple,
Were can find the 3in-a-bed flights
? Someone said at a-z, can't find them. Looking for slims if they got them.

kdog, I am not sure if I have ever seen a 3inabed flight. What do they look like? Like this?:

It's a dartboard(side view) with 3 darts in the trip 20 and under it says three in a bed. I saw them on darts(unicorns) on a-z darts but that's it nothing else.

I found them there is a picture of them on unicorns site. under digiflite, now if can find somewhere to get them.

Contact DarterZ, I believe he special orders stuff from Unicorn. Tell him I sent you ;)

Other places have Unicorn stuff too, like delboy and others but I know DarterZ likes to help out the SEWA crowd as best he can.

Thanks Z,
I found them at a-z. Maybe I'll pm
Darter Z if they come in slim.