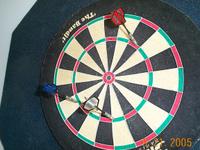 While tossing around with my mystery darts yesterday after work I hit a clean Round of Nine. It was not in a game, nor was it really in any kind of structured practice game, I was just aiming at triples for practice. Triple 18, triple 17, triple 16. I have hit a True round of nine before but it is rare for me. I'd say it might even be more difficult than a Ton-80 since you have to change your aim after each dart. I later played a few rounds of DartPro against an online friend from Bulgaria and did pretty well in those games too. Such evenings tend to give me a lot of confidence. Why do shots like this never happen in league matches? Last Tuesday night I had one good game of cricket but other than that I couldn't hit anything at all. At least I'm rebolstered for next match!
Posted by Zeeple at 5:24 AM

I would say that 180 is more difficult than T19 T18 T17 just because of the space. Cheers Juergen

That's a good point! I hadn't considered that. This should be especially true for me since I normally prefer tapered darts that are a bit wider on the point end. Thanks for the comment.

Nice shot. I slightly adjust my standing on the oche for these targets, and that can be offputting midthrow.

Yeah, I have seen people move around on the oche quite a bit. I never do that. I take my stance and then when I adjust my aim, my waist is the pivot point. Nothing else moves. The only time I will move on the oche is if I have a required target that is blocked (i.e. bull in cricket, etc.).

Funny thing about those great darts socres. I wonder where they are when I need them. During team practice for last weeks league match I hit a round of nine (19,18,17)followed by a 5 mark on the 16 (of course the trip was the last dart), but during the match the best I could muster was a 4 mark on the 20. For me the round of nine is harder to hit as I've never done it during league, but I have hit the 8T0 in league.

I hear ya. Never have I done either in match play. The first round of 9 I hit with witnesses was in the first game AFTER league was done for the night.

Wow, sounds like your hot on the triples. I have been hot on the trips as well the last couple of days. I switched temporarily to a lighter set of darts and I think I am more accurate because I am throwing harder now. Not completely sure though.