Has it been a year already? I guess it has. One year ago today I posted my first blog post to try to find some darts for a set in which I was missing a dart. The Mystery Darts. How appropriate for my one year anniversary post to concern those very darts. They are still mystery darts and I have not found anymore like them but I did find a guy who would make me a duplicate third dart so I could have a complete set: 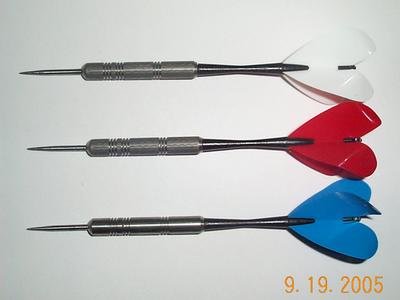 Notice that there are some differences. The new dart is shinier which I would expect, but also the striations that run the length of the dart missing. He said that this was created by running the dart through a particular kind of machine which he did not have and asked if I'd like the other darts to be made smoother so they were all identical. I opted to keep the longitudinal pattern on the others because I have not given up hope for finding some more of them. The same guy in Canada who made my new set also made this one. Here is a close up of the barrels together: 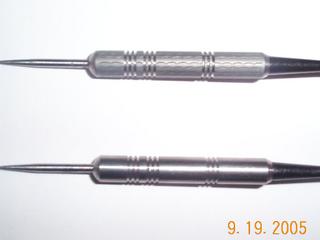 Well, I hope you few who follow my ramblings have enjoyed the blog for the last year. Cheers!
Posted by Zeeple at 5:20 AM

Congrats on the 1 year anniversary. That 3rd dart looks great. As you mentioned except for the striations it looks identical.

Does the person who made your current set and this 3rd dart have a website? How did you find him?

Thanks mcvickj. He has no website but he has been making darts for 50 years. He is the inventor of the Power Point, and sold that patent to Harrows (I do not know the whole story).

His current line of MP's are truely amazing.

Congratulations on your anniversary from Germany. I am really enjoying your stories. Cheers Juergen