I recently gained these darts in a very favorable trade with a guy on Sewa. They are 23 gram GT+ darts that are not made anymore and as far as I know have not been made for decades. These are the first of their kind that I have ever seen, although I have known about these as well as the equally rare GTZ's for a few years now. I wouldn't be surprised to learn that there are even more rare Bottelsen darts out there waiting to be discovered. It first occurred to me to think about Bottelsen's historical offerings when I discovered the set of fixed point Mega-Thrust darts on eBay a few years ago. I wish they would put all of their old catalogs online like Unicorn does. Then I could peruse them looking for even rarer darts ;) 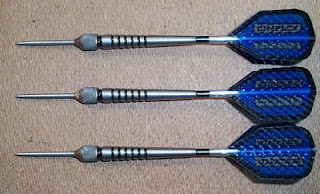 To get these, I traded away my 28 gram Black Widows which I bought probably five or more years ago during league. I haven't thrown them regularly for a long time so it didn't bother me to let them go so much, even though they _are_ attached to the memory of an AWESOME night. I was using them the night that we swept the Molly McGuires team 12-0 in the semi-finals of B League in Fall 2003. I could not miss that night, and the widows were flying very true. Nonetheless, my taste in darts has been leaning towards lighter darts in the last several years so the widows have seen more shelf time than not lately. I did get them out and threw a few practice rounds with them before I shipped them off to JME (of Sewa). The practice rounds were unremarkable which made me feel better about packing them up and shipping them off.

It's funny how people shy away from fat darts because they think it is harder to get them all in a single triple wedge. This may be true in theory, but it has infinitely more to do with consistency in aiming. The below shot is from a Foam Axe practice round I did tonight. 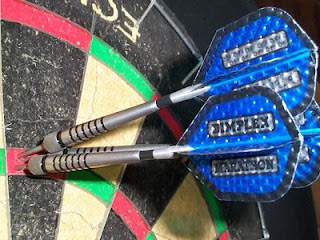 I agree that bomb darts don't have problems getting good groupings. As long as there is room to get the point in the board they tend to make way for eachother. Bombs in brass can be a bit of a problem for me though.