Last season my team, Dart Matter, captained then by Barn, won first place in the B League. We decided to try our luck in A League this season, and I agreed to revisit the old familiar Captain's Chair.

Well last night we won the finals match against a really tough team called The Sofa Kings. It was a tough match and they really had us (okay maybe just me) scared by the time we hit the doubles cricket set because not only was that their strongest game but we could tell they were getting scrappier and picking up the kinda steam you get when you know you are about to lose it all. But in the end we did win a doubles cricket match which was all we needed for the win, final score: 13-8.

We are hoping to get one of their players for our team next year. 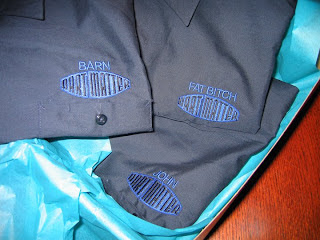 Congratulations on the Finals win Zeeple. I presume you used the 18grm darts that threw so well in practice. Also, I agree with your doubles practice - too many people just pound the 20 in practice.

Yep, I was throwing the Mavs all night long. I did take the Magnums with me just in case I needed a switch but only ended up throwing them a couple rounds total.

And yes, the more you hit the doubles the better you are at them. In our league we have to double in and out both so if you cannot hit them you are doomed!!

Thanks mcvickj! It was a great night and aa fun season!

Zeeple-
Great site.
What's the scoop on Cooper's? I understand that there are luck of the draw tournaments on Sunday's and a big memorial tourney this Saturday. What about the rest of the week... can you expect to show up and get a game? If so, what times are best? I showed up last night (wed) at about 7 and stayed for about an hour and a half with no players. I showed up last Wed and there were about 4. The bar keep said the season is over and maybe people are taking a little break.
Unfortunetly, Wednesdays are about my only semi free night.
You'll have to forgive me, I don't have a ton of experience going to bars and playing... mostly just play friendly games with buddies in the past.
Thanks,
Kyle

Coopers is a cool dart bar. In my experience though you cannot count on finding a game there on any given night, at least not with a tough competitor. I think you are better off looking for games at the Knarr, although you do sometimes get lucky at Coopers too. But to be honest, since I joined league my darts fix is pretty satiated. I don't go out looking for games as much any more.

Thanks for the reply. Maybe I'll run into you someday... until then.

If your team is ever looking for a sub or a fifth and you want to try me out let me know...
Kyle a.k.a DartDawg

Pop in for the Memorial Shoot at Cooper's tomorrow -- the whole DartMatter team will be there and you'll get to meet some of the other league members as well.

Last season, the team on which Zeeple, Barn and John played (and which had two other players, one of whom stayed in B league) was not named DartMatter -- it was Ars Gainne Mill (Gaelic for "Third Dart Wretched").

Thanks Barn.
What time should I show up?
If you see a guy who looks like Kevin James (King of Queens) that's me.

Here's all the scoop on the shoot tomorrow: http://www.seattledarts.com/ecdo_annc.html#ecdomemorial

Zeeple and Barn-
Great to meet you yesterday. I had a great time to say the least... thanks to my partner we were in the money. Any idea who ended up winning?
DartDawg

Right on DartDawg. It was awesome meeting you as well. Glad you ended up in the money. I did not fare so well but you cannot win em all! Hopefully you can come to the Sunday Shoots at coopers sometimes. It is a lot of fun to play those. They are usually a bit smaller, with tiny pay outs but still a lot of fun.