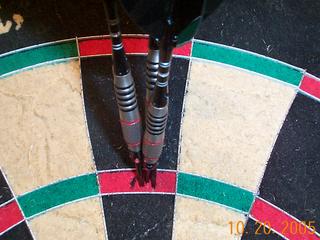 My accuracy with the darts pictured above surprised me a little. I have been in the mindset lately that 24 grams is pretty much the perfect weight for a dart. Depending on the dart of course. Front loaded darts have a wider range of acceptable weights. For example I have been throwing my 27 gram GT3's lately with pretty good accuracy and not suffering due to the extra grammage. So when I picked up the 16 gram darts (in the picture) and started hitting things I was surprised. I put a slightly smaller flight on them (pears) and found they flew pretty much straight and with a good flat trajectory. I did notice that I throw these darts harder. I think this is in response to their lighter weight, and according to a book I am reading (How to Master the Sport of Darts) throwing harder is a more accurate style than lobbing high-arced trajectories. Time will tell.
Posted by Zeeple at 12:44 PM

Just one advise, stick to the same darts set.

Thanks Dax! But sticking to one dart set... I don't know. That's like asking a dog not to bark!

I would go with dax, keep using this set of darts.

Whoah! Look at that grouping - you could've stuck another 9 in there :o)

Thanks 169 Check, thanks Tommo. I have been in a darts rut and this is just what I needed to snap out of it. I think I use this set of darts at league this week.

NICE... hey I fixed the bug in the CricketScorer...let me know if you get it to work...

Cool, I'll download the newest version of the cricket scorer and use it as soon as I can. I have been waiting for someone to make such a tool for quite a while. Thanks a million for doing so!