Even Weighting: The Fat Pencil

The only difference between the Fat Pencil style and the Skinny Pencil style is the thickness of the barrel. Usually the Fat Pencil darts are brass or nickel-silver, and sometimes the lighter tungstens. The first dart below is a FP 25 Gram Black Edge-grip Greatwhite from Bottelsen and I do not like it. First, the "Edge" gripping is nothing more than running the barrel through a threading machine, as if the barrel were a giant bolt. These Greatwhites are 9/32 inch thickness which is too thick for my tastes. I had a similar set of darts that would more accurately fit into the Skinny Pencil category from Bottelsen, which was a 1/4 inch FP Edge grip Kick-Ass, which was a much better barrel. But the threading on the barrel wears down pretty quickly. Of course, since it is only threading, if you have a tap and die set you could always get the grip back by re-threading it.

The second dart is a MP 24 Gram Powerpoint Dimplex, which I absolutely do not like. However, this could have been a really good dart if they had only made the barrel a bit longer and a tad or two thinner. As it is though, it is almost impossible to find a good shaft and flight combo that works well with the barrel. On the other hand, the collar for the point is the nicest looking collar I have ever seen on a dart and will take up to two o-rings invisibly so the point never comes loose. 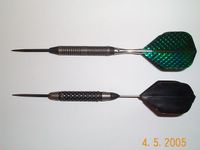 More Fat Pencil Style Darts. Now of course when you are making darts from brass or any light material, the barrel is going to end up being thicker. Too thick to qualify as a Skinny Pencil style dart. The two darts below fit this category. The first is an 18 gram brass dart I bought at Fred Meyer's for three dollars. The second, which I like quite a bit, is a FP 17 Gram generic dart that came included in a cheap paper wound dartboard that I bought. I would be surprised if they are worth even a dollar on the open market since they are just the cheapest possible give-away darts they could come up with. However, I like the feel when I throw them and that is what counts. In fact I like them much, much more than the Powerpoints above. 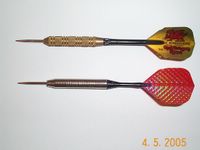 As always, click the image for a larger picture.
Posted by Zeeple at 7:25 AM