Easy Challenge: Checkout 65 without using bull.
Medium Challenge: Checkout 98, using the 18 segment at least once.
Hard Challenge:  Checkout 129 any how you can!
The easy challenge was easily gotten in a typical boring fashion: 45, D10 with one dart left in my hand.  When faced with 65 remaining and three darts I almost always go for the T15 anyway so this was not much of a departure for me.  I was throwing the 24 gram Vintage Hammerheads. 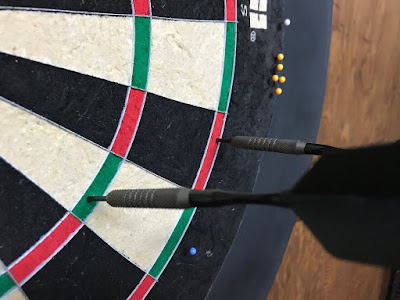 The Medium challenge ostensibly was a much more difficult chore but I achieved it easily enough during the first part of the week, maybe even in the first session, but it has been long enough that I do not remember the deets.  However, I do recall going for the T18 pretty exclusively first dart and then spending a lot of time trying for a D20, D20 with the last two darts after missing into the single 18.  After a while I decided that the better strategy was to go for the T18 with my second dart as well if I missed the first into the S18 and then go for D13 with my last dart for the checkout.  This worked well because on those few occasions where I did actually hit the T18 first dart, I just went for a S18 anyway and kept with the 26 checkout option.  It didn't take long for that strategy to pay off.  I believe I was throwing the 26 gram smooth copper tungsten McCoys. 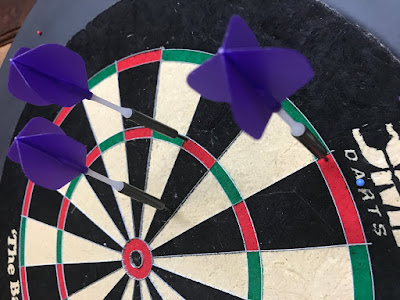 The hard challenge was a doozy and I was convinced I was not going to get it (but I did).  So convinced in fact that I took a couple of pics of darts just barely missing the inner bull to illustrate how agonizingly close I came (more than once).  I took a long time to get this one.  My strategy during the first session was to go bull first dart.  My thinking was that 25 would leave 104, a two-dart out, and a 50 would leave 79, also doable in two darts.  This did not pan out so starting with the second session, and continuing for several days I decided to go T19 first dart, with a miss into the S19 leaving 110, which is still doable in 2 darts (60, DB).  After most of the week going that route, and missing, I finally decided that a first dart 60 would leave me 69 with 2 darts, and a miss into the S20 or anywhere else would give me two extra darts to practice doubles with following my RMD routine. 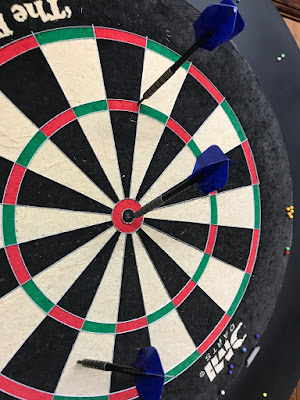