Or maybe it's just the darts that are pretty. I hit Ton-40's galore this last week while I was visiting Seattle, more than I remember ever hitting in a single week. I wish I'd kept count. Monday through Friday I was using my friend's darts and was doing well no matter what I was throwing. But it wasn't until I was back home that I hit my nineteenth ton-80: 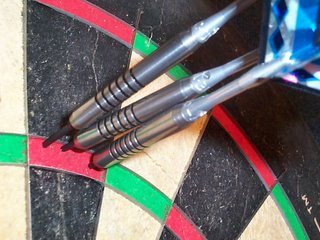 These darts are 30 gram Bottelsen Original Hammerheads. I bought them mid way through a Luck from a bar owner in Seattle and unfortunately didn't win a single game after that! What was I thinking??? This is what I was thinking: Once I picked them up I immediately threw a Ton-40. Then another. Then I told the bar owner I would buy them (committed) and I threw three more Ton-40's while we were waiting for the other half of the luck to finish up their games. It was like I couldn't miss.

I don't know where my ton-plus scores went after the luck entered the final-four stage (we ended up taking fourth) but the darts seems to still be working for me. When I was evaluating the darts, I knew immediately what they were model-wise. After all I've seen the Hammerhead originals on the internet hundreds of times and I knew I liked Hammerhead darts and I think Bottelsen is a terrific dart maker. I casually glanced at the model number and saw it started with 23... which means the darts were supposed to be 23 grams. Since this put them within my acceptable grammage I decided that maybe I would buy them. When I got home I found that they were 30 grams! Whoa! Wait a minute. I have firmly believed for some time now that anything over 24 grams was not likely to provide sustainable performance but here I am throwing my 19th lifetime Ton-80 with a whopping 30 gram set of darts.

Whodathunkit? So 19 is definitely a pretty number. Here's a thought: perhaps it is good I did not count my ton-40's in Seattle. This way I can assume I tossed 19 of them.
Posted by Zeeple at 6:17 PM

That's incredible Juergen! 111 is a tremendous number of maximums to hit in any time period.

Is it true you are having a set of darts made in Copper tungsten? I recently did that too. I love them I love the feel, and I cannot see myself going back to nickel tungsten now.

The Copper Tungsten just feels warm in my hand. I love them.

Yes, it's true. I don't know where the hell you've got your information from, but it must be Jeff who blabs.

I can't say anything about them because they haven't got arrived yet. Will tell you when they're here.

She's adorable! What a beautiful puppy!