These darts are my newest addition and I got them in a trade with crashfromboston. I sent him my 27 gram GT3's and he sent me these. Unlike my temporary exchange with mcvickj, however, this is a permanent trade. I encouraged him many times to consider carefully if he really wanted to make the trade as these darts seem to be a bit rare and definitely unique but he pushed for the trade and assured me that if he ever wanted to have some New World Darts back in his collection he knew where he could get some. So HURRAY!! I love my new darts!

Seen above are the darts in my Initial Preferred Configuration. They came with some longer stems and a triangular tube of other bits and pieces but I like my Dynastuff so I decided to go with these first. I might play around a bit with them before I settle into a config though. The throw a bit awkward to be honest but I think for people who grip a dart more forward on the barrel than I do they would do quite well. They have that mid barrel depression that invites a couple of fingers but I cannot grip a dart like that comfortably so I have my index finger and thumb on the back flutage and my middle finger on the forward flutage. This is how I grip all darts though despite my many different barrel styles.

The story of these darts is a good one and I hope I get it right. And if I do not I hope crash logs in and leaves some comments to correct my version of these unique darts. Apparently there was a guy in Massachusetts who wanted to start a dart making company and called it New World Dart Co. as seen in the label below. He attempted to patent many of his ideas but met with little success as the many of his ideas have been already patented by other entities. But his ideas were definitely unique and I have never ever seen any darts like these before. The label you see below is on the front of the large case that darts came in.

As you can see from the picture below the darts are designed with a brass outer sleeve that have 2ba threading on the stem end and different threading up front. The point is attached to a tungsten insert that slides into the brass sleeve and then screws into place. Oddly, though he did not make this 2ba. Nor is it 1/4" threading. If he had made the forward threading either of these sizes he could have made this a convertible dart. A light brass soft tip dart or, a steel tip dart with a tungsten insert to make it just a little bit heavier for steel tip play. Unfortunately this is not the case and so the darts are a fixed 22 grams and steel tip only. I am willing to bet that if his fledgling company had survived the first frost he would have eventually adapted his design to accommodate both dart worlds. The key you see below, is an old Ford truck key he converted to a point chuck. Very inventive! 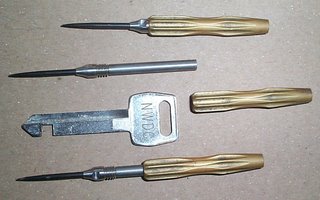 Seen below is the original configuration of the darts as they came to me. I have no idea how they were sold new or even how much they cost. But the medium stems are hard to use for most barrels. Only the shortest barrels can take a medium stem and I have never seen a good occasion to use a long stem. Thus, I did not keep this config. 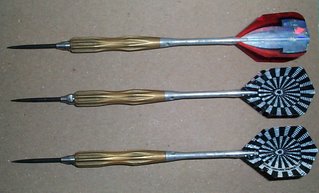 The case is huge for a single set of darts and yet it is another instance of the creativity that went into his whole enterprise. It is a converted gun case. He cut the foam to take the three fully assembled darts, extra flight and stem combos and then there are holes for stems only, a long triangular tube. some slots for some unopened flights, and the place where he put the ford key-chuck. I of course will preserve this as is with all of the contents because it is now a piece of darting history. But the darts themselves, will likely live in a little wooden stand near my dartboard for casual throwing.

All in all I am very happy with this trade and I wish I could make similar trades with some of the darts I have that I do not like as much. That was not my feeling with the GT3's though. Those GT3's really held a very special place in my heart as they were purchased used, and modified by Jeff Pickup to take a screw in stem. I really liked those GT3's. Also, they threw extremely well. I never ton-80'd with them but I have lots of good games with them all the same. 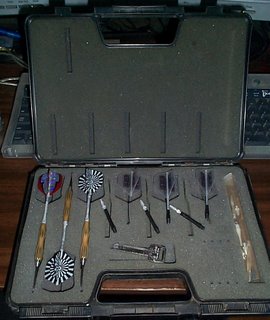 i would say its overall a pretty good explanation of the darts.. i am glad you are enjoying them ..

I am indeed. Have you gotten your GT3's yet?

YES THEY CAME IN SATURDAY..

having a great time throwing them.. 27 gm seems to be a good weight for my throwing style..

SUCCESS!!! Anyone else wanna make a trade?

hey Zeeple
its been a while since i posted anything but i have been doing alot of practicing lately, so away the other night during a league game someone from the other team looked as if he had round flights on his darts,but before i could ask him he was goin, have you ever seen or heard of them and if so do you know if they are any good and where to get them

Round flights, huh? Well I have seen a variety of rounded flights but none that I recall which were perfect circles. You could try Axis:

I thought about them too but they were the size of standards. and they looked like circles, maybe next time I see the guy I'll ask him.
Thanks for all your help Zeeple hope you have a good dart season and have a great holiday season.