We "visited" the other Kate's team last night.  They are all very nice people and last night was another refreshing instance where everyone was still sober by the end of the match.  Everyone there played their best and cared about the results.  This makes for a fun match, even if we did lose 14 - 7.

My performance was mostly okay.  The only thing I can really celebrate from the evening was two singles wins against their two best players.  Other than three Ton's on the night, everywhere else I was mostly a no-show.  At a high level, I won both my singles, but dropped two of my four doubles. The team game was a loss but I did hit two Ton's in that game, but because we are using DartConnect (which doesn't handle league play well), they do not count towards my overall stats for the season.

My first game was singles 401 against Joe, who is not only a good guy, but is a strong contributor to the league, occupying my old role on the board (Competition Secretary).  In that game he was playing better than I was in terms of three dart average, but I happened to hit my Double 8 before he could (and I have no doubt he would have, in short order).  I hit my last Ton of the evening in that game as well.

My second singles game was against Lyle, and it was Cricket.  I played quite strongly and I was proud of my performance in this game.  Lyle is a good shot and a strong competitor and I knew that going in, so I think this was one of those instances where a strong opponent served to raise my game a little.  The thing is tho, I didn't have anything better than a 4 Mark round in that game.  I threw a 2.1 to his 1.6, and I didn't have any dead rounds until we were down to bulls.  This was more of a steady slog through the numbers, ending 169 to 124 in my favor.

My first doubles 501 game was with Cory, and we dropped it to their best two players. Other than a couple of triple 20's during the game, I didn't hit any good numbers and I missed several shots at the out.  My second doubles 501 was with Chris.  We won, but I was little more than a warm body,  I didn't even hit any triples in that game and Chris took out the 35 for us to win.

My first doubles Cricket was with Dani and we lost, again to their two best players.  I hit two dead rounds in that game (including the opening round) but I balanced that with a 6M and a 5M.  They out-shot us however.  My second doubles Cricket was with Julia and we won this one!  Julia opened for us but when it was my turn I hit a Triple 20, missed the 19's, and picked off a single bull with the third dart.  I think that little maneuver gave us a mental edge for the game because we both stepped up.  I hit no dead round sin the game and in the last round I hit two clean single bulls for the win with fat darts.  That did feel good, and since it was my last two darts thrown in the evening, it took the stink off the rest of it :) 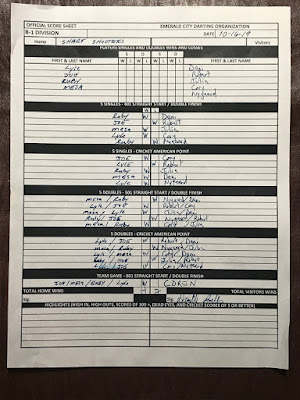 Last night I took the 24 gram Monsters I got in trade recently, and all brought along my 17 gram Super Alloy Bottelsen GT3's.  And I am glad I did.  They threw much better for me in the night than the Monsters did.  The Monsters were doing the thing where they landed in the board with a very salient rightward slant.  Annoying, especially because it ended up blocking the double 8 on me at least once. 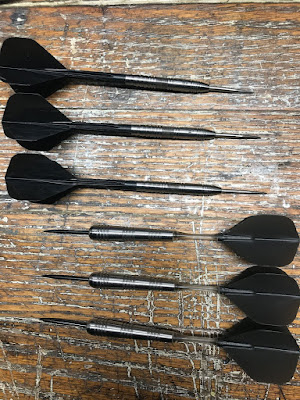