Yesterday I attended a drop in luck at my hosting pub and only three other darters showed up for it, so we had a singles round robin in which each match consisted of three legs.  It was not a best-of, but rather just a straight up three leg match of SIDO 501, Cricket, and "Corker's Choice".  Happily, and quite surprisedly, I did not drop a single leg, despite running up against Captain Tre, who is a fine darter and a formidable opponent.

There was only one tablet present so half the matches were conducted on good old fashion chalk boards (these of which have seen better days).  As such, I do not have turn by turn records of 6 of my 9 legs.  But I know I hit some good numbers and had some really fine visits during the evening, including back to back tons in one 501, a couple of 140's, one (or more) 120+'s, and one Cricket match that included a 7-Mark round and many more triples.

I wish I'd photoed those chalk boards post game.

I brought two sets of darts with me: my 26 gram Designa Thunderbolts, and my 24 gram One80 Revenge's, which are a part of their "Revolution" line: 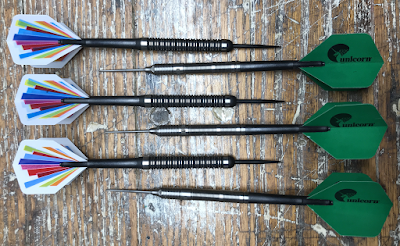 I threw the Revenges for the first two matches, and the Thunderbolts for the last match against Tre.  I love both sets and they were flying quite well for me from the very get-go.  The Revenges have a very funny boing when they hit the board because their points are so thin.  Sort of like when an arrow hits a target in cartoons.  Even in warm up I was very hot on doubles and that carried through to the match as I had little problem finishing.  Here is a Double's Trick I hit during warm, up, as well as a Hat Trick: 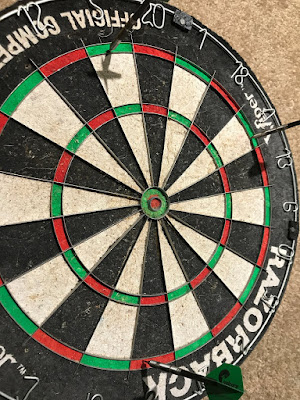 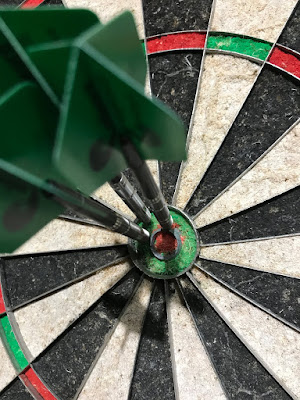 My matches against Ryan and Ronny were pretty straight forward wins as I was throwing quite well, but my three legs against Tre were hard scrabble as he was throwing well too.  In the first 501 he opened with a 100 and then a 140, and maintained a 200 point lead on me through to near then end, but I eventually hit back to back tons to catch up and then took out 20 for the win.  Worth noting: I took out 20 at least three times during that shoot.  Seemed to be my number.  And then in our Cricket, I really do not see how I overcame his superlative shooting.  He was on fire, hit numerous triples, and made me fight hard for the win.  Hard hard.  I wish I had the DartsConnect turn-by-turn for that game.  In that leg I hit a 7-mark, and several other good rounds too, but in the end I think I won due to being hot on bulls.  The last leg of the match was 501, and while I do not remember what the rounds were like, I do know I won it.

At the end of the day I won first (having won all legs) which carried a $20 pot, and was enough to cover not just the $7 entry fee, but lunch as well!
Posted by Zeeple at 8:56 AM