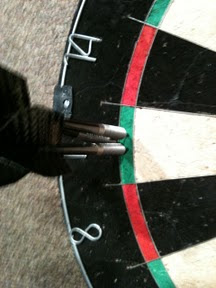 I do not recall the specifics of the doubles matches, although I have the general feeling that my 01 games were better than my cricket games. I opened the team game with a ton and we won that too. I think we won the match, but however it went I am certain it was not a landslide in any direction.
Posted by Zeeple at 11:51 AM