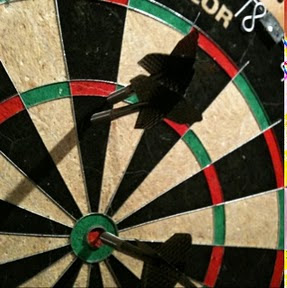 - Posted from my iPhone
Posted by Zeeple at 6:41 PM

Damm nice shot Zeeple! I usually go Trip 18 Double 18, this one should go in my practice routine!

Hi there Rags! How's it goin dude? Funny you should post your comment before I added text to the post since the whole reason I took the picture was to illustrate a discussion regarding the 90 Out!

Right as rain Tommo. I wonder how the pros would weigh in on this issue. Seems like those guys miss so infrequently it is less of an issue for them to think in terms of backup plans etc.

Well interestingly my favourite pro site run by Karlheinz Zochling at dartbase.com is also in full agreement on this one :

"going out on D15 might sound disgusting on first thought, compared to the "normal" T18 - D18 option. But with the latter you are required to hit at least one treble, while the T20 - D15 option lets you go out without absolutely needing a treble. Therefore, if you need this out shot, avoid T18. Only if you have the time for percentage play you should use the T18 - D18 path."

During the last couple of pro events, I watched to see what they would do when on 90 with 3 darts, what I saw was:
Most went straight for the t20, d5 option.
The next biggest option seem to be split between t18, d18 and bull, d20.
Personally I'm more accurate on t20 that Bulls so I'll likely be looking at the t20, d5 option more often. This will be a challenge, because it's an ingrained habit to try t18, d18.