With this hit I have accomplished my first new years resolution and considering the season I better get a move on with the other ones!! 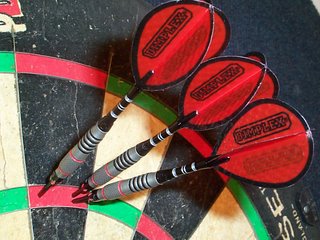 Just some sloppy practice to wind down after the final game of the Cards Padres series. I hit some scattered crap preceeding this and slowly started to zero in on the prize. These are the 16 gram Radarts I used in League so much last year and I also used them in league last Tuesday as well. I used these darts to beat the other teams best guy in a singles Chicago match.

Great shot! I noticed you're using Dimplex. I bought some Rip-Stop pears which are just a bit heavier than the plain ones. They definitely fly differently, and I wasn't expecting to see any difference at all. With Dimplex you may even get a bit more lift due to the golf ball pattern?

i also use dimplex flights altho mine are kite shape

congratulations on another maximum

Hi Tommo, I am not sure if I get more lift from the dimples in the flights or not but I think if I do the difference is infantisimal. I have several of the reip stop flights in different shapes and I like to use those in conjunction with the slikstiks. Seems to be a good combo. Otherwise they are difficult to get into the other stems.

Thanks for stopping in Mista Double. The dimpley flights used to be my fav a long time ago but these days I thhink just about any flight is quite good.

See you in Vegas!