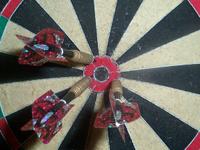 anyways... I fixed the bugs you reported... thank you... I moved the cricket scorer to a new blog...

Awesome, thanks for the quick fixes. Seahag and I had a good time using the cricket scorer yesterday and hopefully we'll have a chance to test the new one today!

It all happens in your head, that's the reason for the difference between practise and the match. Try to be concentrated and cool at the same time. If you're thinking during the match what would happen if you'll win or loss then you've already lost the match. Maybe you should look out for a book about sport psychology. Cheers from Germany

Good advice. I hadn't considered finding an SP primer but perhaps I should. In high school our coach used to have us "picture ourselves winning". I have never tried that in a match.

be sure to read KarlHeinz's great articles about the mental dart game:
http://www.dartbase.com/frames.php3?x=archive.htm
It'll surely improve your game.

pucker factor. Need to play more tournaments/lucks/other locations, to get it out of your head.

Hey I after reading your blog last week and seeing you had a rough week.. I went to dart league wed. and shot aweful... so bad... and my elbow problems returned...

I took the week off and didn't throw at all to let any inflamation in my Cubital Tunnel (where the funny bone nerve is) go down... and got to our bar 2 hours before match and worked out the kinks in my throw... I kicked butt and my team beat the 1st place team in our division 8-3! We even threw a team (4 person) 601 dido game in 28 darts! 40 or less is a write up for our league... Anyways I was interested in how your league match went this week?

Not to disappoint but last week was a bye week for us. I did go down to Louisiana on business though and threw darts there against some of the Hammond steel tip leaguers. I did well against them winning almost all my games. A guy named Yogi schooled me in 501 for a couple matches, but I later skunked him in DIDO 301 so felt a little vindicated. They are a good group of guys down there and I am glad they have thriving steel tip league.