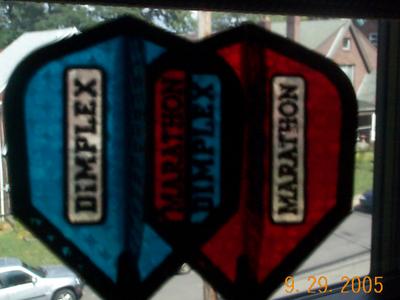 The bad news is we lost our match last night 13-6. The good news is that we did better this week than two weeks ago and my teammates were pumped even at the end when the match was over. Despite back to back stompings my team is happy and looking forward to the next match! No morale boosting necessary for my troops. Talking to them each after the night they all felt that they were throwing well and that each game they had a fair chance to win. And I am certain they did! In one singles match my teammate took out 88 by going 20, 18, double Bull. I was terrifically impressed. I advised him on the round as such: first dart goes to the trip 20. (He missed into the single.) 68 remained with two darts. Second dart goes to the trip 18. (He missed into the single.) 50 remained with one dart and he nailed the double bull. In the end he missed his intended mark with the first two darts and still took out the 88 for the win.

I personally did both quite well and quite poorly. In cricket especially. In my first cricket doubles game in my last round I hit 15, bull, double bull to win. That was exciting. But in my only singles cricket match I allowed myself to be demolished. It was not a lack of strategy either, it was a lack of accuracy. I hit squat that game. But in the next doubles cricket game I hit 5 bulls in the last couple of rounds to come back from behind and win it for us. Fun times.

In the '01 games I did manage to take out 4 once for a win. Other than that I had a poor night. No tons, nor many trip 20s at all. Perhaps next week... By the way the pic has nothing to do with last nights match. I just thought it made a nice visual.
Posted by Zeeple at 5:34 AM

Oh dear - you guys too this week?! At lest the morale and enjoyment is still there for your team, so take that into the next game.

What is the format you play for the 19 points by the way? We play 1 Team game, 3 Doubles games, and 6 Singles games for 10 points overall. Those 10 games take us almost 2 hours on the night.

Here is our format: First team to reach 10 points out of 19 total wins the match. Played in this order: