Middle weighted darts typically have a slight bulge somewhere mid barrel as seen in the darts pictured here. This is my least favorite barrel style due to the weight dynamics of the dart. It is often difficult for me to come up with the optimal shaft and flight combo to match the barrel. I think there is also a lot of gray area in determining what is middle weighted and what is not. Sometimes the widening of the dart occurs close enough to the front that it appears to be a taper, or at least be mostly front tapered, as in the first dart pictured below. Other times the bulge is slight enough that the overall impression of the barrel is that of a Pencil style dart. The Crossfire is a good example of that, as are many soft tip darts. Sometimes the barrel has so much going on that you don't know what to make of it (also exemplified by the Crossfire below).

These darts in the first picture are: (top) 27 gram FP Harrows Axis and (bottom) 25 gram FP Crossfire by (I think) DMI. I found it on the Shooter's Edge site and tracked it down through a different seller for about half price (as I did with the Warrior). 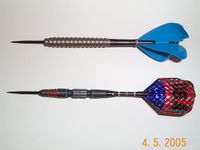 The first dart in the following picture is the architype of the middle weighted barrel. The bulge is non-trivial and the barrels tapers to the front and back almost evenly. This is a nice looking dart and if you find a good shaft and flight combo for it, it feels very good to throw. However, finding a good shaft length and flight size is quite difficult. I have pretty much settled on the short shaft (although this is counter-intuitive) and a standard dimplex flight (which is to be expected). The fantail flights also work quite well on this dart but only with a short shaft. I have also used a long aluminum shaft with good results, but such a stem requires either a standard flight or a spiraline. The top dart in the picture is the 24 gram FP 20/20 from Mueller Sports.

The second dart shown is sold as a soft tip dart that I have converted to steel with the contoured aluminum points you see in the photo. It is a 17 gram Halex Silversoft with a Micro aluminum shaft and spiraline flights. I used to hate this dart until my finger placement moved forward. Now that my forward finger rests on the point of the dart I do better with it. 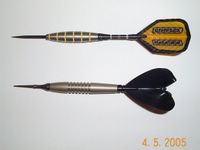 As always, click the image for a larger picture.
Posted by Zeeple at 6:40 PM