Even Weighting: The Skinny Pencil

I would say that the even weighted dart is hands down the most common barrel style in the darting world. It is in its simplest form an unadorned shaft with a point. Given how little lathe work is required to make such a barrel it does not surprise me that they are so common. The darts below are both Fixed Point. The first is a 28 Gram Laserdarts Blackwidow and the second is a 24 Gram Dart Freak from Mueller Sports. 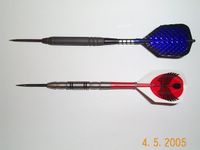 More Skinny Pencils: Of the three below, only the second is not Fixed Point. The first dart is a 22 Gram Halex Tungsten which was bought at Fred Meyer's. The second is special. It is a highly modifiable dart from Voks from their "Soft-Steel" series, so named because you can switch from soft tips to steel tip, and swap out the insert to achieve a heavier or lighter dart depending on your preference. In the photo below it has the tungsten insert and the steel tip and weighs in at about 18 Grams. The last dart is a 15 Gram Red Dragon Featherlite. 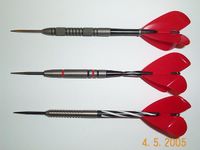 As always, click the image for a larger picture.
Posted by Zeeple at 3:49 AM