Today's match was a first for me, in many ways.  I played against Kornfed, whom I expected to wallop me handily, and due to time, circumstances, and weather we decided to play against each other over the internet.  This was the first manner in which it was a first.  I'd played my good buddy barn over the net using ezchalk.net many times back in the day so I guess it wasn't that much of a first, but I'd yet to play an official match this was.  The score keeper was DartConnect, and I used my phone for a camera, and we used a WhatsApp call to share our video streams.  Pretty good set up, I think.

I lost 2-3.  But I did not get walloped which is nice.  Kornfed can throw a mean dart and I expected to put up a strong fight but I knew going in that the competition would be fierce.  Even though it was a loss, the funny thing is, the loss was only slight.  Check it out:

Pretty fucking even.  The kicker is that I had many opportunities to win more legs but my finishing suffered a bit and I couldn't close the deal resulting in more losses than I really needed to endure.

The lowlights are that I lost the match (of course) but more importantly, struggling to finish.

Here is what I have learned from my losses and from the match in general.  First, don't ever play a match in your own garage in the middle of winter if the garage is so cold you are actually shivering when the match starts.  Those are not ideal conditions and I think they affected my game.  I had a space heater going the whole time but it did not help much.  Secondly, never start a long match without a proper warm up.  You don't want to give up games or even sets because you are still getting loose.  The coldness in my garage kept me away from the board until the match started and I only took 9 warm up darts.

I lost the first set 1-3.  The first loss was straight up anemia, never having thrown even a single dart at the double ring.  Second leg was my only win and I took out 16 spending about three darts to do so. The third game was mostly anemic. I afforded myself 2 darts at the double ring before I lost and they were both misses. The last game of the set was also a loss but it was a strong game for me, relatively.  I hit at least four triple 20's in there, spread across four rounds, and had a 52.6 average for the leg.  I was able to whittle the score down to 80 when my opponent took out 112 for the win. 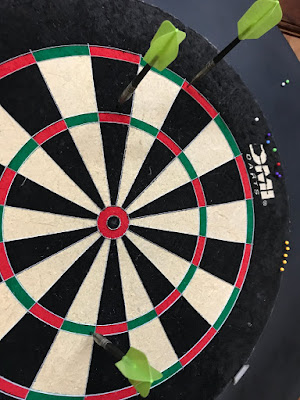 The fourth set was a loss, 2-3.  I am not going to analyze every leg, but here are a few things that happened: In the first leg I busted 80 with a miss int the T20 and never got another chance. In the second leg I spent 12 darts missing the D5 before I lost in my worst case of finishing-suffering of the match.  In another leg I was left with 82 and decided to go pro with 50, 32, and hit the inner bull first dart!  But then missed the 32 with the other two darts.  I took it out next round though so that was at least a win.

The fifth set I lost 0-3.  All three were strong efforts on my part, but my opponent was stronger. In the first two legs I never had an opportunity to throw for a double.  In the last leg I did.  I hit a 140 and a 125 in the game and at one point I was sitting on 103.  Hit the S20, T19, but then missed the D12 outside.  Next round I managed to halve it to 12, then next visit I halved it again to 6. Then I spent three darts missing the D3 outside, and then that was it.  Kornfed won the leg, the set, and the match.

In the final analysis, of my 12 losses, three were due to not putting up big scores (anemia), four were due to an inability to finish, and in five I was simply overpowered by a strong opponent.  I have certainly had worse losses!  As for finishing across all 21 legs, I spent 68 darts aimed at the double ring and hit it successfully 9 times.  This is actually worse than last week at 7.5 darts per successful double.

In this match I used the 19 gram Nobu's, dressed the same as last time.  I am liking this dart as my go-to dart.  Funnily, even though I had several other darts available to me I was never tempted even once to pick up a different set.