Last night we visited the Incredibulls at the Old Peculiar, and they did not fall short of their name.  They brought their A Game and won the match 16-5.  Two of those wins were very satisfying wins for me, but I must say, I felt like I was mostly throwing rubbish during the night.  The Incredibulls are a swell team full of nice people and I like them immensely.

My first singles game was a 401 against Tre.  It was an unremarkable, B-Leaguey kinda game, and I whittled my score down to zero with low numbers until I took out 39 for the win.  The one thing I am happy about with this game is that I hit the double 16 with my second dart at it.

My single Cricket match was against Tom, who is a swell darter.  We were both throwing well, but I could not overcome his dominant performance.  He opened with three 20's and I responded with three 19's.  Then he tripled in the 19's and score 40 points on me.  I chased him the rest of the game. I had one dead round and one 5 mark round but the rest was only average play.  In the end I hit the bulls when I needed to (with a single and a double in two rounds), but then so dis he.  He won 212 to 160, but had he not also been hot on bulls that would have been a nice win for me for sure.

My first doubles match was a 501 with Julia and we lost.  This was not a bad effort at all. I had back to back tons within it, and then when left 80 by my partner I went 20, 20, and then missed the double 20 inside to leave 20, but my partner never had a shot at it as they took out their own 20 to win in the next turn. My other doubles 501 was with Chris, also a loss.  The game consisted of middling scores, and I had one shot at a 72 out but could only reduce it to 20 before the other team won.

My first doubles Cricket was with Cory and it was a highly satisfying win. It was a point war between their 20's and our 18's.  I never had a dead round in the match and I also only had one round in which I hit fewer than 2 marks.  Several triples and 4 mark rounds and in the end I did not miss the bulls.  My last dart was a double bull for the win and the final score was 428 to 340.

My last doubles Cricket was with Dani, and it was a loss. I hit mostly one and two marks and only had one dead round.  However, again, I was on target with the bulls, but it was not enough to win. They wrapped it up quickly and won 18 to 0.  The team game was rubbish.  I hit 21, 41, 21, 41 and then had a shot at the 34 for the win but missed outside with the first two darts and then wired it on the inside with the last, cutting it in half for my teammates. I never had another throw during that game.  Frustratingly, after the match I hit a spate of tons and ton-40's.  WTF? 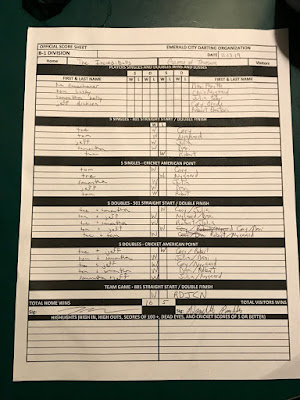 The darts I used were the 22 gram One80 Revenges, which I have been favoring lately.  I am thinking about switching it up for next week.  Several times during the night I found myself wishing I'd brought more than one set of darts because sometimes your throw gets hinky and you want a couple of correction rounds.  Next week I'll bring more.  Maybe the Dark Thunder's and the Superalloy GT's. We'll see :)  Also, as you can see, the Revenges are sporting the new titanium spinners that Cosmo Darts sent me gratis recently.  They spin nicely and they are attractive to boot. 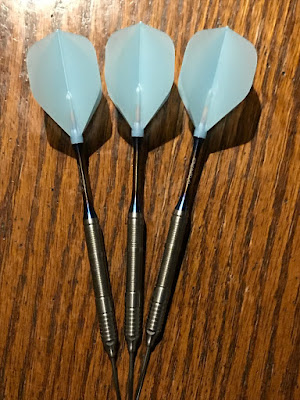 Also last night one of the opponents brought their dog, Tyrion, and he hung out on a nearby bench during the match.  A sweet, docile little fella.  He provided a much needed dog fix throughout the night as I lost my sweet girl over seven months ago.  Frequently between games (or even throws) I would sit on the bench next to him and pet him.  I wish I'd gotten a better pic! 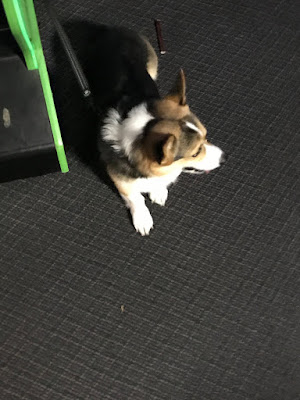 Anyway.  My performance was lackluster last night (if I am being generous) but Tyrion and the good company of mine and the other team made it a good night.
Posted by Zeeple at 10:10 AM