This is the closest I have come to a Deadeye in a long time.  This was actually my very first throw of the night during a team practice get together, and it came in the first throw of a Cricket match in which I decided, completely on a lark, to employ the Kristian Strategy. 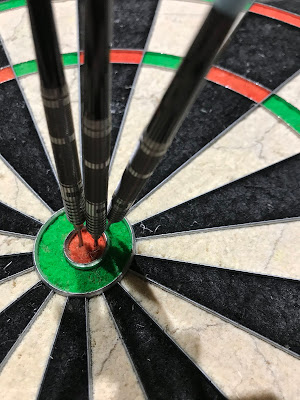 I hit one or two other four counts in the bulls during the night, and at least once with two darts being in the inner bull.  Worth noting:  my opponent won the Cricket game by one point.  He was as on fire as I was.  It was one of the best Cricket games either of us had ever thrown.

This 5 Count came off my 22 gram One80 Revenges, configured with tweenie nylon Fit Flight stems and standard Fit Flight flights.
Posted by Zeeple at 9:38 AM