The Various Dart Games and How to Play Them

This is another old darts book that I got I don't know where.  It probably would have sat forever unread if I hadn't had a recent reinterest in darts. Written in the mid 1930's it is chuck full of things that are no longer true, but it is a fun, if short read nonetheless.

The book has its own dust cover, even tho it is a paperback and the pages, the scant 84 of them, are thick.  Also, the print is not small.  All of these factors contribute to this book being a fast read. 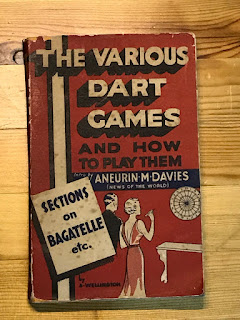 Here are a few tidbits that I found of interest:

The first thing that strikes me about this book is that the author refers to darts as something that used to be tawdry if not outright stigma carrying (due to the game's tight association with public houses), but then goes on to discuss how darts have become this country-wide phenomenon in which virtually everyone (like, everyone) plays. "Don't be surprised if you receive and invitation to darts and dancing," the author claims.

I also quite enjoyed the author's incredibly verbose description of what it means to bust.  It seems obvious to me, but perhaps at one point in time the concept of none (of the three darts in the round) counting if you exceed your remaining score was difficult to understand. "If the total does go further, a peculiar condition comes into force."  The author carries on for several paragraphs, and even touches on the idea that busting deliberately is not foul play as some believe but rather a smart tactic available to a savvy player.

In this book and others I have seen some interesting terms used for the bull: "dosser" and "woozle", for example.

The book offers up some interesting rules for club play as well (what we'd refer to as leagues in America, perhaps).  Among them:


This book, in a marked departure from every other thing I have seen written on the subject, talks about the importance of aiming.  It even suggests that when aiming you aim a little bit above the spot you are hoping to hit, and that you angle your dart slightly upward in your hand when aiming.  This is an odd departure and I think most darters can tell you aiming is ineffective and awkward.  Better to focus on the target and let eye-hand coordination deliver the dart to the target.

Also, in agreement with at least one other source I have read states that it is bad form to continue throwing your darts after a bust.  Once you bust, you retrieve whatever darts are in the board and surrender the oche to your opponent.

Interestingly, the book states that asking to borrow darts is considered ill manners and is something you just don't do.  I find this odd, and slightly contrary to what I understand of the British character: congenial, friendly, always willing to help and ready with a smile.  I have borrowed darts to darters on league nights on many occasions.  I have even borrowed them to opponents!  I see no problem with it, and while I don't see myself ever needing to borrow darts (because I have so many) I equally cannot see myself ever refusing to share darts with someone in a pub.  Also worth noting, there are American dart games (played mostly in churches these days) in which a communal set of darts is used throughout the game.

I love the section that talks about dart care and how to replace a feather flight. An excerpt: "New flights are not difficult to cut from feathers gleaned from the kitchen when a chicken is being prepared by the cook. All that is necessary it to look at the old flight and to select a piece of the feather, taken from the chicken, cutting it to correct shape."  Fascinating!

The vocab learned in these old books is always fascinating too.  Here are a couple worth noting:

Here are the games the book covers:

Round the Clock
This one is largely the same as of other descriptions of the game in other books with this exception: even though the doubles and triples in the 1 thru 20 beds count as singles for 1 through 19, to win the game the player must either hit the Double 20, or the Inner bull.

Shanghai
Same as in other books.

Cricket
Same as in other books, but this version suggests the number of wickets needed is negotiable.

Shove Ha'penny
This book offers up some interesting difference for this game.  First, if you go over the number of hits you need in any bed all of your opponents benefit from the extras, not just the next one on the chalkboard.  Also, all the other descriptions of this game that I have seen state emphatically that one must throw the winning dart and cannot receive it as a "shove" from your opponent.  In this version, however, that is not true.  You can end up winning the game on your opponent's turn, if they are unskilled in their throwing.

Fives
As in other descriptions I have seen, the score is added up from zero to something (usually 50).  Otherwise it is the same game.

Lastly the book covers a several games that are not darts games at all even though they seem to be at least in part pub games:

Shove Ha'Penny.  This seems to be a combination of miniature shuffleboard, and American (darts) cricket.  You play by trying to slide three pennies into each of 9 bands on a small wooden board. If I am ever in England, I will definitely want to seek out this game and have a go at it.

Bagatelle is a small version or species of billiards in the sense that you are shooting small balls with a cue on a small board.  Corinthian Bagatelle, on the other hand seems to be a miniature, wood-based pin ball.  More games I'd like to try.

I was curious enough to seek out some youtube videos on how to play them:


Anyway.  Nice read.  I hope I can find more old darts books like this one!